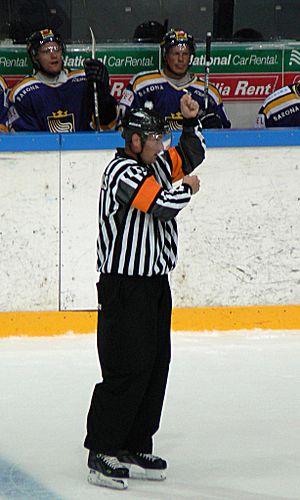 A referee signals a penalty for high sticking

A penalty in ice hockey is a punishment when a player breaks rules during a game. A referee or a game official will decide the penalty. Normally it is done by placing the person in a penalty box for a certain amount of time. After that the player can go back into the game. There are several types of penalties. Some are more serious and some are less.

All content from Kiddle encyclopedia articles (including the article images and facts) can be freely used under Attribution-ShareAlike license, unless stated otherwise. Cite this article:
Penalty (ice hockey) Facts for Kids. Kiddle Encyclopedia.