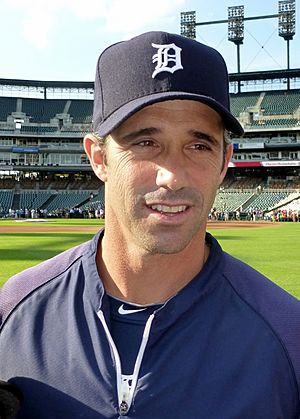 Bradley David Ausmus (born April 14, 1969) is a former baseball catcher and manager. He played for the San Diego Padres, Detroit Tigers, Houston Astros, and Los Angeles Dodgers. He made his Major League Baseball debut in 1993 and retired from playing after the 2010 season. He was managed Detroit from 2014 to 2017.

All content from Kiddle encyclopedia articles (including the article images and facts) can be freely used under Attribution-ShareAlike license, unless stated otherwise. Cite this article:
Brad Ausmus Facts for Kids. Kiddle Encyclopedia.