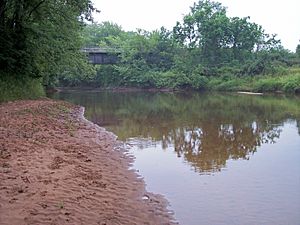 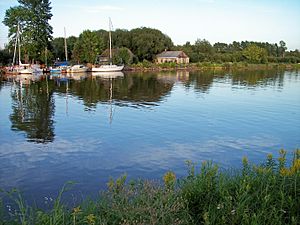 The Ontonagon River in Ontonagon, just above its mouth at Lake Superior 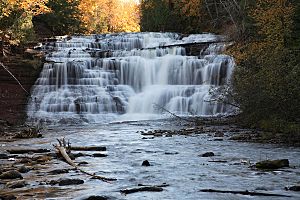 Agate Falls on the Middle Branch

The Ontonagon River ( ON-tə-NAH-gən) is a river flowing into Lake Superior at the village of Ontonagon, on the western Upper Peninsula of Michigan in the United States. The main stem of the river is 25 miles (40 km) long and is formed by a confluence of several longer branches, portions of which have been collectively designated as a National Wild and Scenic River. Several waterfalls occur on the river including Agate Falls and Bond Falls.

The Ontonagon River's principal tributaries are its West, South, Middle and East branches, all of which flow in part through the Ottawa National Forest:

Below the confluence of its various branches, the Ontonagon River flows generally north-northwestwardly for 24.7 miles (39.7 km) in Ontonagon County to the village of Ontonagon, where it flows into Lake Superior.

On March 3, 1992, the following reaches of the Ontonagon's upper tributaries were collectively designated the Ontonagon National Wild and Scenic River: The upper courses of the East and Middle branches in the Ottawa National Forest; the Cisco Branch in its entirety; and approximately the middle section of the West Branch, from Cascade Falls to the Victoria Reservoir.

During the mid-19th century, a very large mass of solid, nearly pure copper, the Ontonagon Boulder, was removed from the Ontonagon River. It now is in the Smithsonian National Museum of Natural History in Washington, D.C.

All content from Kiddle encyclopedia articles (including the article images and facts) can be freely used under Attribution-ShareAlike license, unless stated otherwise. Cite this article:
Ontonagon River Facts for Kids. Kiddle Encyclopedia.