Vilas County is a county in the state of Wisconsin, United States. As of the 2010 census, the population was 21,430. Its county seat is Eagle River.

The earliest inhabitants of Vilas County were members of the Chippewa band of Native Americans; the first recorded white settler was a man named Ashman who established a trading post in Lac du Flambeau in 1818.

In the 1850s migrants from New England, primarily from Vermont and Connecticut, constructed wagon roads and trails through Vilas County including the Ontonogan Mail Trail and a military road from Fort Howard to Fort Wilkins in Copper Harbor, Michigan.

Vilas County was set off from Oneida County on April 12, 1893 and named for William Freeman Vilas. Originally from Vermont, Vilas represented Wisconsin in the United States Senate from 1891 to 1897.

Logging began in the late 1850s. Loggers came from Cortland County, New York, Carroll County, New Hampshire, Orange County, Vermont and Down East Maine in what is now Washington County, Maine and Hancock County, Maine. Many dams were built throughout the county to assist loggers as they sent their timber downstream to the lumber and paper mills in the Wisconsin River valley. After the county was founded in 1893 and logging ceased to be the primary industry in the area, migrants seeking other forms of employment settled in the county. These later immigrants primarily came from Germany, Ireland and Poland though some came from other parts of the United States. 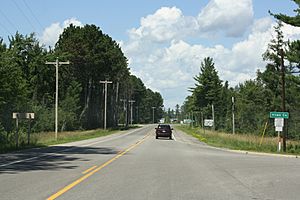 According to the U.S. Census Bureau, the county has a total area of 1,018 square miles (2,640 km2), of which 857 square miles (2,220 km2) is land and 161 square miles (420 km2) (16%) is water. There are 1,318 lakes in the county. Much of Vilas County is covered by the Chequamegon-Nicolet National Forest and the Northern Highland-American Legion State Forest as well as extensive county forest lands. Vilas County waters drain to Lake Superior, Lake Michigan, and the Mississippi River. The Wisconsin, Flambeau, and Presque Isle Rivers all find their headwaters in Vilas County.

Although these two forests have been administratively combined into the Chequamegon-Nicolet National Forest, it is important to note that the county contains portions of both original forests.

The economy in Vilas County is based on tourism centered on its high concentration of lakes and forests. Hunting and sport fishing are the backbones of the fall economy, and ice fishing and especially snowmobiling makes up the bulk of the economy in the wintertime. Logging, forestry, construction and government also account for important parts of the local economy.

All content from Kiddle encyclopedia articles (including the article images and facts) can be freely used under Attribution-ShareAlike license, unless stated otherwise. Cite this article:
Vilas County, Wisconsin Facts for Kids. Kiddle Encyclopedia.