Kids Encyclopedia Facts
For the ship of the same name, see City of Ashland (shipwreck). For the Town of Ashland, see Ashland (town), Wisconsin. 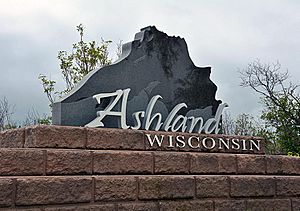 Ashland is a city in Ashland and Bayfield counties in the U.S. state of Wisconsin. It is the county seat of Ashland County. The city is a port on Lake Superior, near the head of Chequamegon Bay. The population was 7,908 at the 2020 census, all of whom resided in the Ashland County portion of the city. The unpopulated Bayfield County portion is in the city's southwest, bordered by the easternmost part of the Town of Eileen.

The junction of U.S. Route 2 and Wisconsin Highway 13 is located at this city. It is the home of Northland College, Northwood Technical College, and the Sigurd Olson Environmental Institute.

Four flags have flown over the area around Ashland: Spanish, French, English and American. Eight Indian nations have lived on Chequamegon Bay. Later settlers included European explorers, missionaries and fur traders, and more recently, Yankees who platted and developed the lands, railroaders, shippers, loggers, entrepreneurs, and other settlers. The area was part of the Northwest Territory and was subsequently part of four successive territories before becoming part of the state of Wisconsin: Indiana Territory, Michigan Territory, Illinois Territory, and Wisconsin Territory.

About the time Christopher Columbus arrived in the New World, the Ojibwe people came to the land they called Sha-ga-waun-il-ong. This term has been translated numerous ways: "lowlands", the "needle", "the region of shallow water", and where "there are large extended breakers". Each is descriptive and suitably accurate.

The Ojibwe stayed on Chequamegon Point for about a century before leaving, first to settle on Madeline Island and then to move to the Sault region.

French fur traders Pierre d'Esprit, le Sieur Radisson and Medard Chouart, le Sieur des Groseillers were the first Europeans of record to visit Chequamegon Bay. They arrived in 1659 and built what has been called the first European dwelling place in Wisconsin. A historical marker is located at Maslowski Beach on U.S. Route 2 on the west end of Ashland. The monument was erected in 1929 by the Old Settlers Club.

The Ojibwe heartily welcomed the Frenchmen. Five years later, Father Claude-Jean Allouez arrived. A Jesuit missionary, he brought the first word of Christianity to Wisconsin's shores. Allouez built a chapel not far from Radisson's and Groseillier's stockade and remained at the Bay until 1669. 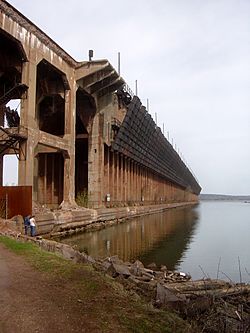 The massive Soo Line ore dock in 2007, before its demolition.

In 1854, Ohioans Asaph Whittlesey and George Kilborn set out from La Pointe to explore the head of Chequamegon Bay. Whittlesey built a 10 ft (3.0 m) × 14 ft (4.3 m) cabin in Ashland. His wife, Lucy, and daughter, Eugenia, joined him in August and prepared to winter in their new home. Signs of civilization quickly followed. The first community dance was held at their house. The Reverend L.H. Wheeler preached the first sermon on the first Independence Day that was observed there. It was the location of the first post office and polling place for county offices. Sunday school was also conducted on the premises.

Other dates of note:

The harbor of Ashland was dominated by the massive Wisconsin Central Railway (later Soo Line) ore dock, built in 1916 to load iron ore mined in the area into freighters bound for ports in the Rust Belt. The last of what were once many such docks, the concrete structure is 80 feet (24 m) high and 75 feet (23 m) wide and in 1925 the dock was extended to 1,800 feet (550 m); it was last used to ship ore in 1965. In 2007 the Wisconsin Trust for Historic Preservation named it one of the "10 most endangered historic buildings in Wisconsin", a list intended to stir preservation efforts. The main concrete structure and trestle slowly deteriorated since the early 1970s because of lack of maintenance and the effects of the environment. A structural inspection completed in 2006 and 2007 concluded that the ore dock had become structurally unsafe and was an imminent safety hazard. On May 14, 2009, the Ashland Planning Commission granted Canadian National Railway approval for the demolition. All material on the ore dock was removed down to the concrete base. This was completed in 2013.

The base of the ore dock remains. The city took ownership of it from Canadian National Railway in May, 2014. It is working with a consultant group to design a redevelopment plan for the base of the dock. 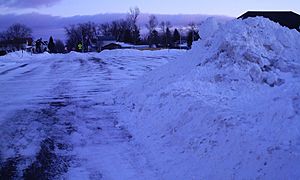 Large amounts of snow can accumulate over the long, cold winters.

There are four distinct seasons, with notably cold winters. Due to its proximity to Lake Superior, lake effect snow is sometimes a phenomenon in Ashland. 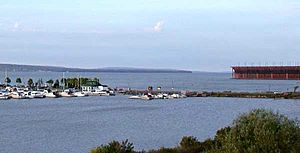 Ashland Marina, looking north across Chequamegon Bay toward Lake Superior, with the ore dock in the background

The two major highways in the city are U.S. Highway 2 and Wisconsin Highway 13.

The city is one of the northern termini in Wisconsin for the Canadian National Railway (CN), parent company of the former Wisconsin Central Ltd. It took over the former Soo Line tracks in 1987. However, after flooding in 2016 caused substantial damage to bridges south of town, CN discontinued service to Ashland (trains now reach only as far north as Morse).

Other public use airports near Ashland:

Local transportation is provided by the non-profit Bay Area Rural Transit (BART) system, which has bus stops throughout the community. Headquartered in Ashland's Industrial Park, BART also provides transportation to and from other communities in the Chequamegon Bay region, including Washburn, and Bayfield.

The region is served by the Chequamegon Bay Arts Council, a non-profit organization promoting the arts in northern Wisconsin.

The Ashland Chamber Music Society is a volunteer organization that provides a venue for local and regional musicians to perform chamber music in the Ashland area.

The Bay Area Film Society is a group of film enthusiasts who sponsor the screening of classic films.

Natural places in the vicinity include Lake Superior, the Whittlesey Creek National Wildlife Refuge, and the nearby Chequamegon-Nicolet National Forest. 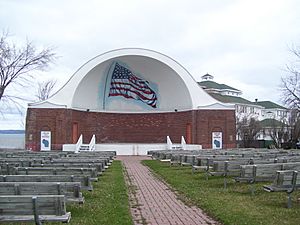 The Band Shell, located at Memorial Park, is a common summertime venue for outdoor music. 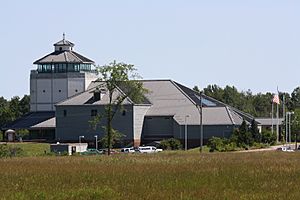 The Northern Great Lakes Visitor Center is located west of Ashland, along U.S. Route 2. It houses a geographic and natural history museum, as well as a bookstore and archive office of the Wisconsin Historical Society.

A few of the largest manufacturers in the community include:

Many small businesses also make up a large portion of the local economy. Tourism is an important part of the area's commerce. The summer season attracts tourists for activities on the Great Lakes. 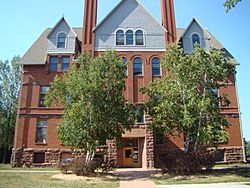 Wheeler Hall, the original and oldest building at Northland College, is listed on the National Register of Historic Places.

All content from Kiddle encyclopedia articles (including the article images and facts) can be freely used under Attribution-ShareAlike license, unless stated otherwise. Cite this article:
Ashland, Wisconsin Facts for Kids. Kiddle Encyclopedia.