Bayfield is a city in Bayfield County, Wisconsin, United States. The population was 487 at the 2010 census. This makes it the city with the smallest population in Wisconsin. In fact, for a new city to be incorporated today, state regulations require a population of at least 1,000 residents, so it would have to be incorporated as a village instead.

Wisconsin Highway 13 serves as a main route in the community. It is a former county seat, lumbering town, and commercial fishing community, which today is a tourist and resort destination. There are many restaurants, hotels, bed & breakfast establishments, specialty shops, and marine services. The local Chamber of Commerce refers to Bayfield as the "Gateway to the Apostle Islands".

Bayfield was named in 1856. A post office has been in operation at Bayfield since 1856.

Bayfield is considered the main gateway to the Apostle Islands National Lakeshore, a world-famous freshwater sailing, boating and kayaking destination on Lake Superior. Madeline Island, the largest of the Apostle Islands and the only one with private residences, is another popular destination near Bayfield. The ferry to Madeline Island links Bayfield with La Pointe, Wisconsin, a town on the island. 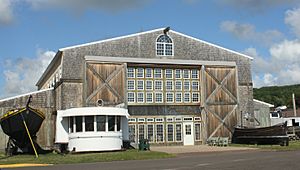 The city of Bayfield is known in the Anishinaabe language as Oshki-oodena ("New-town"), opposed to Superior, Wisconsin, which is known as Gete-oodena ("Old-town"), in reference to the Ojibwa migration.

The Bayfield Maritime Museum and Bayfield Heritage Museum are the city’s two museums. There are several art galleries. Nearby is the 950 seat all-canvas tent theater known as Big Top Chautauqua which during its summer season has hosted such entertainers as Willie Nelson and Lyle Lovett.

Bayfield’s annual Apple Fest draws about 60,000 visitors during the first weekend in October. Popular summertime events include Bayfield Race Week regatta, held during the week of the 4th of July and the Festival of Arts and Gallery Tour, which takes place the third weekend of July. It features artists from across the midwest, along with tours and demos at a diverse array of local galleries. In wintertime, the Apostle Islands Sled Dog Race is the largest sled dog race in the midwest with between 50 and 75 teams competing annually. It takes place the first weekend of February.

Bus service to the community is provided by Bay Area Rural Transit.

All content from Kiddle encyclopedia articles (including the article images and facts) can be freely used under Attribution-ShareAlike license, unless stated otherwise. Cite this article:
Bayfield, Wisconsin Facts for Kids. Kiddle Encyclopedia.