The Ahnapee River is a 14.7-mile-long (23.7 km) river on the Door Peninsula in eastern Wisconsin in the United States. It rises in Door County, Wisconsin, and flows through Kewaunee County into Lake Michigan at the city of Algoma. Its name has been ascribed as coming from the Ojibwe word aanapii meaning "when?". 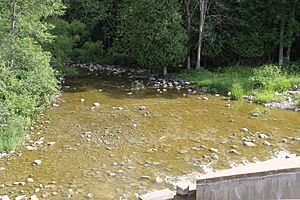 The Ahnapee River below the dam at Forestville

The Ahnapee rises in southern Door County and flows generally southeastwardly into northeastern Kewaunee County, past the village of Forestville, where it is dammed. Downstream of Forestville the river becomes a freshwater estuary of Lake Michigan and is paralleled by a rail trail called the Ahnapee State Trail. It joins Lake Michigan at the city of Algoma.

All content from Kiddle encyclopedia articles (including the article images and facts) can be freely used under Attribution-ShareAlike license, unless stated otherwise. Cite this article:
Ahnapee River Facts for Kids. Kiddle Encyclopedia.