Menominee is part of the Marinette, WI–MI Micropolitan Statistical Area.

Menominee was named after a regional Native American tribe known as the Menominee, whose name roughly translates into "wild rice," which they cultivated as a staple food. In historic times, this area was the traditional territory of the Menominee Indian Tribe. They were removed to west of the Mississippi River and now have a reservation along the Wolf River in North Central Wisconsin.

Menominee gained prominence in the 19th century as a lumber town; in its heyday, it produced more lumber than any other city in the United States of America. During this time of prosperity, the Menominee Opera House was built. It is being restored. In the 1910s a cycle car, the "Dudly Bug", was manufactured in Menominee. In the waning years of lumber production, local business interests, interested in diversifying Menominee's manufacturing base, attracted inventor Marshall Burns Lloyd and his Minneapolis company Lloyd Manufacturing, which made wicker baby buggies. In 1917 Lloyd invented an automated process for weaving wicker and manufactured it as the Lloyd Loom. This machine process is still in use today. In the 21st century, the economy of Menominee is based on manufacturing (paper products, wicker lawn furniture, and auto supplies) and tourism.

In 1940, during the "Vote for Gracie" publicity stunt in which comedian Gracie Allen ran for President, she was nominated for mayor of Menominee, but was disqualified because she was not a resident of the city.

The Menominee Maroons won the state high school championship in its division for basketball in 1967 and football in 1998, 2006 and 2007. In the 2006 season the Maroons finished unbeaten and only allowed 38 points scored against them but their offense scored 513 point in that entire season . They beat the former Wisconsin and Minnesota Division One state champions. Menominee shares a historic high school football rivalry with neighbor Marinette, Wisconsin. The two have conducted the third longest rivalry in the nation. 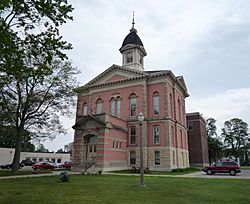 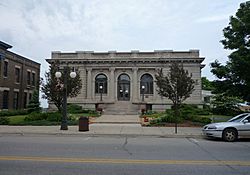 Spies Public Library is on the waterfront in downtown Menominee.

Menominee has a cairn marking the halfway point between the North Pole and the Equator. This is slightly north of the 45th parallel north, due to the flattening of the earth at the poles. This is one of six Michigan sites and 29 places in the U.S.A. where such signs are known to exist.

Menominee, Michigan, is also the site of the Menominee Crack, an unusual geological feature that formed spontaneously in 2010.

This climatic region is typified by large seasonal temperature differences, with warm to hot (and often humid) summers and cold (sometimes severely cold) winters. According to the Köppen Climate Classification system, Menominee has a humid continental climate, abbreviated "Dfb" on climate maps.

There were 3,987 households of which 26.3% had children under the age of 18 living with them, 40.0% were married couples living together, 12.6% had a female householder with no husband present, 5.4% had a male householder with no wife present, and 42.0% were non-families. 37.1% of all households were made up of individuals and 14.5% had someone living alone who was 65 years of age or older. The average household size was 2.13 and the average family size was 2.74.

There were 4,063 households out of which 27.9% had children under the age of 18 living with them, 43.6% were married couples living together, 12.4% had a female householder with no husband present, and 39.9% were non-families. 35.3% of all households were made up of individuals and 15.0% had someone living alone who was 65 years of age or older. The average household size was 2.22 and the average family size was 2.86. 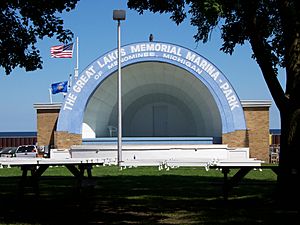 Much of Menominee's L-shaped downtown runs along the shores of the bay of Green Bay and includes the Great Lakes Memorial Marina and park. Many of the downtown buildings, built at the end of the 19th century or the beginning of the 20th, have been restored. They now provide space for several upscale restaurants, gift shops, beauty salons and day spas, antiques shops, galleries and a variety of essential services. The Menominee Bandshell is a focal point for concerts, an art show, a car show and a four-day community festival.

Menominee is serviced by the Menominee-Marinette Twin County Airport (KMNM)

Menominee's waterfront is the setting for public events in the summer, including a city-sponsored festival. The Marinette Menominee Area Chamber of Commerce coordinates a concert series held on Thursdays from late June to mid-August. The Cabela Master Walleye Circuit brought hundreds of fishermen and women to the area for tournaments in 2005, 2008 and 2009.

All content from Kiddle encyclopedia articles (including the article images and facts) can be freely used under Attribution-ShareAlike license, unless stated otherwise. Cite this article:
Menominee, Michigan Facts for Kids. Kiddle Encyclopedia.