Marinette is a city in and the county seat of Marinette County, Wisconsin, United States. It is located on the south bank of the Menominee River, at its mouth at Green Bay, part of Lake Michigan; to the north is Stephenson Island (Wisconsin), part of the city preserved as park. During the lumbering boom of the late 19th century, Marinette became the tenth-largest city in Wisconsin in 1900, with its peak population of 16,195.

Marinette is the principal city of the Marinette, WI–MI Micropolitan Statistical Area, which includes all of Marinette County, Wisconsin and Menominee County, Michigan. The population was 10,968 at the 2010 census. Menominee, Michigan is across the river to the north, and the cities are connected by three bridges. Menominee, Michigan, and Marinette are sometimes described as "twin cities." 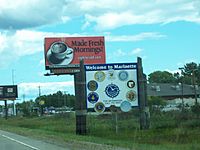 The town and county were named Marinette after Marie Antoinette Chevalier (1793, Langlade County, Wisconsin – 1865, Green Bay, Wisconsin), an influential Métis woman who ran a trading post near the mouth of the Menominee River. She came to be known as "Queen Marinette." Her father was Bertrand Chevalier, a British trader of French Canadian ancestry, who was involved with an early trading post at Green Bay. Her mother was Lucy, the daughter of a Menominee chief, Wauba-Shish (Great Marten).

Marie Antoinette Chevalier's family moved with her father to Green Bay. He took a young trading partner, John Jacobs, whom Marie Antoinette later married. They had three children together. In 1823 John and Marie Antoinette came to the settlement that became known as Marinette. Their son John B. Jacobs later plotted the town. Chevalier's husband disappeared during a trading trip. She later married his partner William Farnsworth of the American Fur Company. They also had three children together. Marie Antoinette Chevalier Farnsworth continued with the trading post after Farnsworth left the area for the next frontier at Sheboygan. She was known for her business sense, fairness, and influence in the region, with ties to both the Menominee and European communities.

After her death, Chevalier was buried in Allouez, Wisconsin. In 1987 her descendants had Chevalier reinterred in a sarcophagus at the Forest Home Mausoleum in Marinette. Her original tombstone is on display at the museum on Stephenson Island in Marinette. 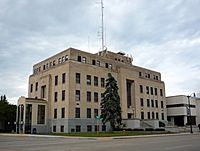 Dunlap Square Building in downtown, listed on the National Register of Historic Places

The site of Marinette was first settled by a small Algonquin band of Menominee people, known to the neighboring Ojibwe as "the wild rice people" for their staple crop. It consisted of 40 to 80 men and their families. They lived at the mouth of the Menominee River in the 17th and 18th centuries, which, according to their creation story, was the tribe's place of origin.

Before 1830, French Canadians established a fur trading post at the settlement. The first European settler was Stanislaus Chappu, also known as Chappee. After the War of 1812, the United States took over this area and the fur trade, refusing to license Canadian traders, with whom the Americans had previously passed back and forth across the border. John Jacob Astor's American Fur Company became most prominent in the region, although the fur trade was declining after 1830.

In the late 19th century, the city developed rapidly as a port and processing area for lumber harvested in the interior. Logs were floated down the Menominee River and shipped out on Green Bay to communities around the Great Lakes and to the East. In 1853, the population was 478; by 1860 the number of people in the growing community had reached 3,059. Due to the lumbering boom, between 1890 and 1900, the population more than doubled from 7,710 to its peak of 16,195. At that time, it was the tenth-largest city in Wisconsin. It had a wide variety of businesses and a

The saloons accommodated the many single men who worked in the lumber industry.

Although lumbering trailed off at the start of the 20th century, with clear cutting of some areas, the town has continued to take advantage of its position along those bodies of water. Five bridges cross the river to connect Marinette to Menominee, Michigan. Lumbering still contributes to the area economy but jobs and population declined when the industry slowed.

Marinette has a major paper mill (Kimberly Clark), and other plants such as Marinette Marine, a shipyard owned by the Italian firm, Fincantieri; Ansul/Tyco, a manufacturer of fire protection systems; Waupaca Foundry, KS Kolbenschmidt US Inc. formerly known as Karl Schmidt Unisia, Inc., cast and machined automotive parts; and Silvan Industries, a manufacturer of pressure vessels and part of the Samuel Pressure Vessel Group.

The county seat includes what is now the eastern neighborhood of Menekaunee, formerly an independent village. The first European-American settlers came to Menekaunee in 1845. For some time Menekaunee was also known as East Marinette. The name Menekaunee is of Menominee origin, from Minikani Se'peu, meaning 'village or town river'.

Population peaked circa 1900, and vacillated for a few decades. With the decline in lumbering and restructuring in industry, the city has lost jobs and population since 1940, as shown in the table at right.

There were 4,934 households of which 27.9% had children under the age of 18 living with them, 37.4% were married couples living together, 13.2% had a female householder with no husband present, 6.3% had a male householder with no wife present, and 43.2% were non-families. 37.3% of all households were made up of individuals and 17.2% had someone living alone who was 65 years of age or older. The average household size was 2.17 and the average family size was 2.81.

No interstate highways pass through Marinette.

Historically, the Chicago and Northwestern Railway served Marinette. There is currently no passenger rail service in Marinette. Freight rail service is still available. Freight railroad service is now provided by Wisconsin Central Ltd. which is the legal name of the Canadian National Railway Company in Wisconsin. However, the railroad right of way between the crossing of U.S. Hwy. 41, just north of Velp Avenue in Green Bay, and the WCL right of way, is also legally known as the Sault Ste. Marie Bridge Company right of way, also known as the "Super Sam." The Escanaba & Lake Superior Railroad Company also provides freight railroad service to Marinette by means of an Agreement with CN to use CN trackage from Escanaba to Marinette. The E&LS line from Wausaukee to Marinette is currently not much used by E&LS to serve Marinette, but is property of E&LS, on the former Milwaukee Road (Chicago, Milwaukee, St. Paul & Pacific Railroad Co.) right of way.

The closest airport offering commercial transportation is Green Bay-Austin Straubel International Airport in Green Bay, about an hour away.

Historically, a ferry connected the twin city of Menominee, Michigan to Sturgeon Bay, Wisconsin. There is currently no ferry service to Marinette or Menominee.

University of Wisconsin-Marinette is the home to both Theatre on the Bay and Children's Theatre. All performances are held in the Herbert L. Williams Theatre on the UW-Marinette Campus. Together the two organizations traditionally present 2 musicals and 3 straight plays to the community. 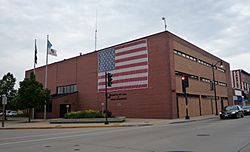 Marinette offers a variety of recreational activities and major events throughout the year. Tourism is promoted by the Marinette Menominee Area Chamber of Commerce.

Marinette is located along the Menominee River and along Green Bay, a major bay of Lake Michigan. Both bodies of water offer fishing and boating opportunities. There are several local events related to these sports, such as fishing derbies and sailboat races.

Visitors to the area are cautioned that county permits are not valid for use at the four city launches.

In 2003, the Pete Schwaba film The Godfather of Green Bay was shot in Marinette and its neighboring city, Menominee, Michigan.

All content from Kiddle encyclopedia articles (including the article images and facts) can be freely used under Attribution-ShareAlike license, unless stated otherwise. Cite this article:
Marinette, Wisconsin Facts for Kids. Kiddle Encyclopedia.