Many of the peninsula's hardwoods were cut down for use in the charcoal-fired iron furnaces operated by the Jackson Iron Company in 1867–1891 at what is now Fayette State Park, on the peninsula's western shore. With its access to Great Lakes shipping, the remaining lumber of the Garden Peninsula was largely logged by the 1890s. However, the area is still home to endemic plants and disjunct populations.

After the conclusion of the old-growth logging era, homesteaders tried to develop an agricultural economy on the cleared land; but these efforts largely failed in the 20th century, the main exceptions being fruit such as strawberries. Much of the peninsula reverted to second-growth woodland within the Lake Superior State Forest. 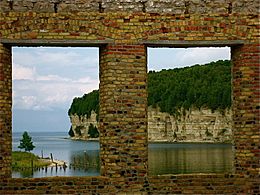 A view of the escarpment's limestone cliffs at Fayette Historic Townsite.

The island-strewn waters around the Garden Peninsula continue to yield a harvest of freshwater fish. One of the peninsula's largest bays, Gillnet Haven Bay southeast of Fayette on the peninsula's eastern shore, commemorates the gill nets used by Lake Michigan's Native American fishermen.

All content from Kiddle encyclopedia articles (including the article images and facts) can be freely used under Attribution-ShareAlike license, unless stated otherwise. Cite this article:
Garden Peninsula Facts for Kids. Kiddle Encyclopedia.