Kids Encyclopedia Facts
This page is about the city. For the adjacent town, see Oconto (town), Wisconsin.

Oconto is a city in Oconto County, Wisconsin, United States. The population was 4,513 at the 2010 census. It is part of the Green Bay Metropolitan Statistical Area. The city is located partially within the town of Oconto.

The city of Oconto was incorporated in 1869. The city took its name from the nearby Oconto River.

The first church in the world built for the Christian Science Church was erected in 1886 in Oconto and still stands at the corner of Main Street and Chicago Street. The land was donated by Henry (1837–1904) and Victoria Sargent (1848–1930).

In the summer of 1952, during a two-day period, an estimated 175,000,000 Leopard frogs emerged from nearby marshes and enveloped the town. The water level of Lake Michigan rose in the spring, flooding the wetlands. The Leopard frogs laid their eggs, and when the lake level receded with the heat of summer, most of the eggs would die. But in 1952, Lake Michigan remained high, and a huge number of frog eggs grew into live amphibians.

Oconto is located at the mouth of the Oconto River, which feeds into Lake Michigan.

The table at right with historical census data indicates that the population has remained relatively flat throughout the 20th century. 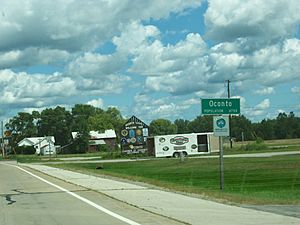 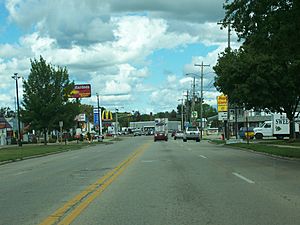 Looking north at the eastern terminus of Wisconsin Highway 22 at U.S. Route 41 in Oconto

The following schools are available in Oconto:

All content from Kiddle encyclopedia articles (including the article images and facts) can be freely used under Attribution-ShareAlike license, unless stated otherwise. Cite this article:
Oconto, Wisconsin Facts for Kids. Kiddle Encyclopedia.