Kids Encyclopedia Facts
"Manistique" redirects here. For the racehorse, see Manistique (horse).
Not to be confused with Manistee, Michigan.

Manistique, formerly Monistique, is the only city and county seat of Schoolcraft County in the U.S. state of Michigan. As of the 2010 census, the city population was 3,097.

The city borders the adjacent Manistique Township, but the two are administered independently. The city lies on the north shore of Lake Michigan at the mouth of the Manistique River, which forms a natural harbor that has been improved with breakwaters, dredging, and the Manistique East Breakwater Light. The city is named after the river. The economy depends heavily on tourism from Lake Michigan, as well as nearby Indian Lake State Park and Palms Book State Park. 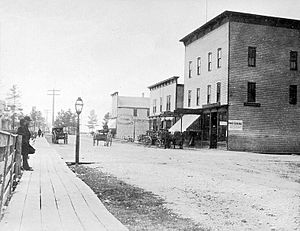 Originally named Eastport, Manistique replaced Onota as the county seat. Eppsport was the name of the post office, but was not used for the community. Manistique was incorporated as a village in 1883 and as a city in 1901 by the state legislature. With the river originally spelled Monistique, a spelling error in the city charter led to its current spelling.

This climatic region is typified by large seasonal temperature differences, with warm to hot (and often humid) summers and cold (sometimes severely cold) winters. According to the Köppen Climate Classification system, Manistique has a humid continental climate, abbreviated "Dfb" on climate maps.

All content from Kiddle encyclopedia articles (including the article images and facts) can be freely used under Attribution-ShareAlike license, unless stated otherwise. Cite this article:
Manistique, Michigan Facts for Kids. Kiddle Encyclopedia.