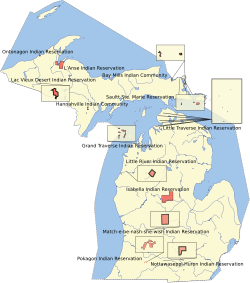 The Bay Mills Indian Community (BMIC), known in Ojibwe as Gnoozhekaaning (Place of the Pike), is an Indian reservation forming the land base of one of the many Sault Ste. Marie bands of Chippewa (aka Ojibwa) Indians. The largest section of the reservation is located in Chippewa County, Michigan, approximately 15 miles (25 km) west-southwest of Sault Ste. Marie; it has land in both Bay Mills and Superior townships. A smaller section lies southeast of Sault Ste. Marie and encompasses Sugar Island, all contained within the Sugar Island Township.

The Ojibwa were a large tribe with numerous bands who occupied territory around the Great Lakes, particularly Lake Superior and Lake Michigan, in what are now Canada and the United States (where they have been known as Chippewa).

Numerous bands have historically occupied areas around Sault Ste. Marie, Michigan and Ontario, with the city long established during the colonial era as a French and then British fur trading post. This gradually developed as a settled community, cosmopolitan in its varied cultures. In the 19th century, the Ojibwa/Chippewa bands in Michigan were forced to cede large amounts of territory, and many bands became landless. They persisted in maintaining their cultural communities.

Bay Mills people are Ojibwa or Chippewa who have lived for hundreds of years around the Whitefish Bay, the falls of the St. Marys River and the bluffs overlooking Tahquamenon Bay, all on Lake Superior and southwest of Sault Ste. Marie. The Bay Mills Indian Community was officially established by an Act of Congress on June 19, 1860.

After passage of the federal Indian Reorganization Act (IRA) of 1934, during the administration of President Franklin D. Roosevelt, the Bay Mills Indian Community (BMIC) created a new form of government under a written constitution, adopted on November 27, 1937. This was approved and recognized by the federal government, which purchased land for the community to establish a reservation land base. Its territory was one of the four reservations established in Michigan under the 1934 act. These lands, along with the original Bay Mills Mission and a small area on Sugar Island, occupied by its people at least since the late 18th century, comprise the majority of the current reservation land holdings in Chippewa County.

In 1966, BMIC was one of the four founding members of the Inter-Tribal Michigan Indian Council, established to share their developments and to improve relations of tribes with the state and federal governments. Other founding members were the Keweenaw Potawatomie Indian Community, Hannahville Indian Community, and the Saginaw Chippewa Indian Tribe. The Council now represents 11 of the 12 federally recognized tribes in Michigan.

The area within the reservation boundaries is in U.S. trust status and is divided into two separate areas. As of the 2000 census the majority of the land base, 3.761 square miles (9.74 km2), lies northwest of Brimley, Michigan, in the eastern parts of Bay Mills and Superior townships, while the remainder, 1.032 square miles (2.674 km² or 660.67 acres), lies on Sugar Island in the St. Marys River southeast of Sault Ste. Marie. Its total land area at the time of organization in 1937 was 4.793 square miles (12.41 km2), on which a population of 812 persons resided.

All content from Kiddle encyclopedia articles (including the article images and facts) can be freely used under Attribution-ShareAlike license, unless stated otherwise. Cite this article:
Bay Mills Indian Community Facts for Kids. Kiddle Encyclopedia.