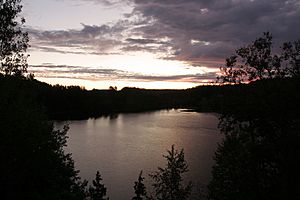 View of the Nipigon River

The Nipigon River was formerly known for the size and quantity of the brook trout that were to be found there. However, four dams built on the Nipigon led to a major decline in their population. The four dams are as follows:

Three hydroelectric dams, Cameron Falls Dam, Alexander Dam, and Pine Portage Dam on the Nipigon provided 2,144 gigawatt-hours in 2000. This however effectively makes travel via boat between Lake Nipigon and Lake Superior impossible. The river is also a popular fishing destination. 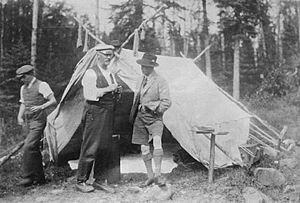 Prince Edward, Prince of Wales talks with river guide Neil McDougall at their camp on the Nipigon River, 1919.

In 1915 Dr Cook caught the world record for the largest brook trout, aka speckled trout, or coaster trout. Four years later, Prince Edward, Prince of Wales (later King Edward VIII and Duke of Windsor), spent time fishing on the Nipigon; a trout that he caught was mounted and today is displayed at the National Archives of Canada. The river also has a run of lake trout, rainbow trout and salmon during various times of the year. Fish that migrate up the river are able to get to the first dam which is located approximately 15 miles (24 km) from the mouth of the river system. The reservoir between the dams are good fishery, especially for large speckled trout and lake trout. Fishing starts the first of May until freeze up at the end of November. The river can be accessed from boat, or fished by shore from various strategic locations.

All content from Kiddle encyclopedia articles (including the article images and facts) can be freely used under Attribution-ShareAlike license, unless stated otherwise. Cite this article:
Nipigon River Facts for Kids. Kiddle Encyclopedia.