The SR-71 Blackbird is a supersonic reconnaissance aircraft. It was built by Lockheed's "Skunk Works" in the 1960s for the United States Air Force (USAF). In other words, it was a spy plane.

The Blackbird was designed to fly at more than Mach 3 – three times the speed of sound. This meant it would become very hot during flight. To help with this, most of the aircraft was made of titanium. Radar absorbing material was also used to make the aircraft more difficult to detect.

SR-71 Blackbird used a special fuel called JP-7. Before the flight, the fuel tanks used to leak. This is because at ground altitude the tolerances (distance between parts of the fuel tank) were larger than at the plane's cruising altitude. Once in the air, because of the speed and air resistance, the parts became very hot. Because of this heat, the distance between the parts shrank stopping the loss of fuel.

The aircraft also had cameras and radars fitted to take photographs of targets.

The first Blackbird flight happened on December 22, 1964 in Palmdale, California. In January 1966, the first aircraft entered service with the USAF. No aircraft were lost in war but one crashed in an accident in 1969. Only 32 aircraft were built. Its final flight was on March 6, 1990, Blackbird S/N 61-7972. The SR-71 program was retired from service in 1998. 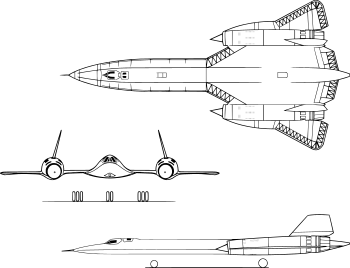 All content from Kiddle encyclopedia articles (including the article images and facts) can be freely used under Attribution-ShareAlike license, unless stated otherwise. Cite this article:
Lockheed SR-71 Blackbird Facts for Kids. Kiddle Encyclopedia.