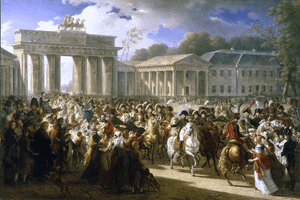 A military strategy is a set of ideas or policy used by armed forces to get the results they want. Strategy is used to win combat, battles and wars. It involves planning, logistics (the movement and use of forces and equipment), and the deception of the enemy.

Strategy and tactics are closely related. Both deal with distance, time and force but strategy is large scale while tactics are small scale. Originally strategy was understood to govern the prelude to a battle while tactics controlled its execution. However, in the world wars of the 20th century, the distinction between manoeuvre and battle, strategy and tactics, became blurred. Tactics that were once the province of a company of cavalry would be applied to a panzer army.

In its purest form, strategy dealt solely with military issues. In earlier societies, a king or political leader was often the same person as the military leader. If he was not, the distance of communication between the political and the military leader was small. But as the need of a professional army grew, the bounds between the politicians and the military came to be recognized. In many cases, it was decided that there was a need for a separation. As French statesman Georges Clemenceau said, "war is too important a business to be left to soldiers." This gave rise to the concept of the grand strategy which encompasses the management of the resources of an entire nation in the conduct of warfare. In the environment of the grand strategy, the military component is largely reduced to operational strategy -- the planning and control of large military units such as corps and divisions. As the size and number of the armies grew and the technology to communicate and control improved, the difference between "military strategy" and "grand strategy" shrank.

Fundamental to grand strategy is the diplomacy through which a nation might forge alliances or pressure another nation into compliance, thereby achieving victory without resorting to combat. Another element of grand strategy is the management of the post-war peace. As Clausewitz stated, a successful military strategy may be a means to an end, but it is not an end in itself. There are numerous examples in history where victory on the battlefield has not translated into long term peace and security.

Strategy (and tactics) must constantly evolve in response to technological advances. A successful strategy from one era tends to remain in favour long after new developments in military weaponry and matériel have rendered it obsolete. World War I, and to a great extent the American Civil War, saw Napoleonic tactics of "offense at all costs" pitted against the defensive power of the trench, machine gun and barbed wire. As a reaction to her WWI experience, France entered World War II with a purely defensive doctrine, epitomised by the "impregnable" Maginot Line, but only to be completely avoided in the German blitzkrieg.

"Do not repeat the tactics which have gained you one victory, but let your methods be regulated by the infinite variety of circumstances." –Sun Tzu 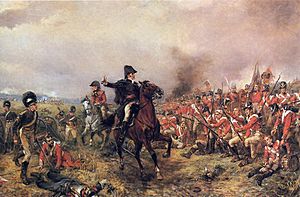 Many military strategists have attempted to encapsulate a successful strategy in a set of principles. Sun Tzu defined 13 principles in his The Art of War while Napoleon listed 115 maxims. American Civil War General Nathan Bedford Forrest required only one; "get there furstest with the mostest". The fundamental concepts common to most lists of principles are:

Some strategists assert that adhering to the fundamental principles guarantees victory while others claim war is unpredictable and the general must be flexible in formulating a strategy. Field Marshal Count Helmuth von Moltke expressed strategy as a system of "ad hoc expedients" by which a general must take action while under pressure. These underlying principles of strategy have survived relatively unscathed as the technology of warfare has developed.

All content from Kiddle encyclopedia articles (including the article images and facts) can be freely used under Attribution-ShareAlike license, unless stated otherwise. Cite this article:
Military strategy Facts for Kids. Kiddle Encyclopedia.