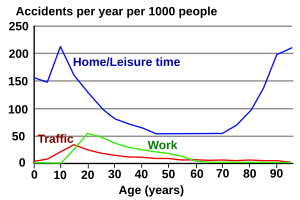 Incidence of accidents in Denmark, sorted by activity and age

Road accidents kill thousands of people each month in the United States, and thousands each week in the world. They injure more thousands each week. The majority involve a car but there are also many bus, truck and bicycle accidents. Aircraft crashes, ship sinkings and other transport accidents also attract much attention.

Injuries from accidents, however, are more numerous at home than elsewhere. They attract less attention because only a few people are hurt at a time.

Often, accidents are investigated so that we can learn how to avoid them in the future. Sometimes by studying an accident we can discover new things, for example penicillin.

Most of the deaths resulting from injuries are caused by fire accidents. Thus, accidental fires are one of the leading causes of unintentional deaths. The main cause of death in fire incidents is burning, but inhalation of smoke and toxic gas causes death as well. Often the cause of the fire is very simple and unexpected, such as forgetting a candle near something flammable, defect in the hardware, or old electrical wires. So most of the large fires are caused by simple reasons.

Industrial accidents such as mine cave-ins and the West Gate Bridge collapse also kill and maim many workers. The Bhopal disaster killed thousands, mostly not workers.

An accident at work is defined as an external, sudden and violent event. Work accidents happen while an someone is working. It may cause the injury or death of the worker or someone else. For an accident to be a work accident, there must be a direct or indirect relationship of cause and effect between the accident and the work.

Many construction workers are injured. There are multiple reasons for that, but the main reason is working on the edge of high buildings without using a safety belt. Thus, you have to follow the safety rules when you are working on these places.

Chemical accidents can happen in a laboratory. Especially, some students make chemical mistakes that injure them seriously.

All content from Kiddle encyclopedia articles (including the article images and facts) can be freely used under Attribution-ShareAlike license, unless stated otherwise. Cite this article:
Accident Facts for Kids. Kiddle Encyclopedia.