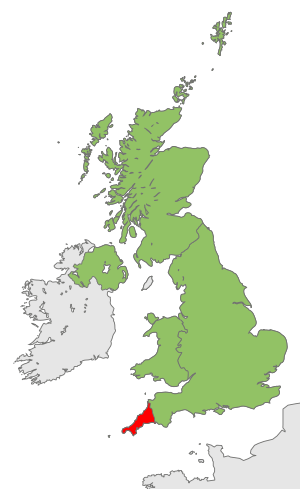 Cornish nationalists advocate either greater autonomy within England, or a split to become the United Kingdom's fifth home nation.

The Cornish self-government movement (sometimes referred to as Cornish nationalism) is a social movement which seeks greater autonomy for the distinctive area of Cornwall. The movement's advocates argue that Cornwall is not merely a county of England (which is its current administrative status) but a duchy and a distinctive British nation which has never been formally incorporated into England via an Act of Union of 1707. Supporters of Cornish self-government who assert that Cornwall is, or ought to be, a separate legal entity from England do not necessarily mean to advocate full independence from the United Kingdom, but rather seek official recognition for Cornwall as one of the constituent countries or home nations of the UK.

Some supporters of Cornish self-government question the legitimacy of English rule in Cornwall, due to the failure of the former Parliament of England to ever pass an Act of Union, although their claims are not generally recognised within the United Kingdom (or sometimes within Cornwall itself). However, many see some degree of autonomy as a stepping stone towards this, and are supportive of the Cornish Assembly Campaign. The Cornish National Party (CNP) is a social democratic political party in Cornwall to which some Cornish nationalists belong. It wants Cornish independence from the United Kingdom.

All content from Kiddle encyclopedia articles (including the article images and facts) can be freely used under Attribution-ShareAlike license, unless stated otherwise. Cite this article:
Cornish nationalism Facts for Kids. Kiddle Encyclopedia.