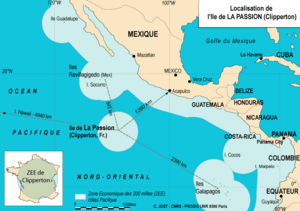 Clipperton Island is an uninhabited atoll in the Pacific Ocean, off the coast of Central America. It is about 6 square kilometres (2.3 sq mi) in size, and is an overseas territory of France. In Spanish, it is known as Isla de la Pasión. It is about 1,280 kilometres (800 mi) from Acapulco. The nearest French settlements is Papeete, 5,400 kilometres (3,400 mi) away. Paris is 10,677 kilometres (6,634 mi) away. Clipperton Island is about 945 km (587 mi; 510 nmi) south-east of Socorro Island in the Revillagigedo Archipelago, which is the nearest land.

All content from Kiddle encyclopedia articles (including the article images and facts) can be freely used under Attribution-ShareAlike license, unless stated otherwise. Cite this article:
Clipperton Island Facts for Kids. Kiddle Encyclopedia.