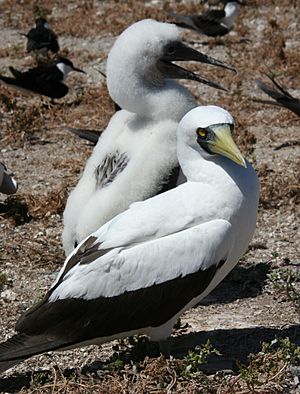 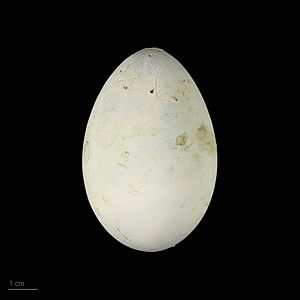 The masked booby, Sula dactylatra, is a large seabird of the booby family, Sulidae.

These birds often fight each other for certain types of fish. Many adults will create a flock of their own to take down a school of fish but many boobies hunt alone so their catch is not stolen by the other birds in the area.

They are often mistaken for the common seagull due to the primary white color on its feathers.

The masked booby nests in small colonies. It lays two chalky white eggs on sandy beaches in shallow depressions, which are incubated by both adults for 45 days.

In most cases, the first chick will kill its smaller, weaker sibling after it hatches. Siblicide is what it is called. Research shows that the boobies can feed two chicks, but they do so at a cost to health and future reproductive success.

Compared to other species of boobies such as the blue-footed booby, siblicide always happens in the masked booby. One reason is because the masked boobies build very shallow flat nests, so older chicks can expel their younger siblings with relative ease. Blue-footed booby parents, meanwhile, build nests with steeper sides, thus preventing some older chicks from engaging in siblicidal behaviour.

All content from Kiddle encyclopedia articles (including the article images and facts) can be freely used under Attribution-ShareAlike license, unless stated otherwise. Cite this article:
Masked booby Facts for Kids. Kiddle Encyclopedia.