Gironde (Occitan: Gironda) is a department in the southwest of France. It is named after the Gironde estuary.

The department is in the region of Nouvelle-Aquitaine. Its prefecture is Bordeaux.

Gironde was formed during the French Revolution on 4 March 1790 with parts of the old provinces of Guyenne and Gascony.

From July 1793 to April 1795, the department's name was changed to Bec-d'Ambès to avoid the association with the Girondists, a French revolutionary group.

The department was divided into seven districts: Bordeaux, Libourne, La Réole, Bazas, Cadillac, Blaye and Lesparre. Its capital was the city of Bordeaux.

Gironde is part of the Nouvelle-Aquitaine region, southwestern France, and is the largest department of Metropolitan France with an area of 9,975.6 km2 (3,852 sq mi).

There four main zones in the Gironde; they are:

The department is bordered by the departments: Charente-Maritime, Dordogne, Lot-et-Garonne and Landes. The Atlantic Ocean (Gulf of Biscay) is to the west of the department.

The main rivers in the department are the Dordogne and the Garonne rivers; the two rivers form, after their confluence, the Gironde estuary, the largest estuary of France.

Gironde is part of the region of Nouvelle-Aquitaine and is managed by the Departmental Council of Gironde in Bordeaux.

There are 6 arrondissements (districts), 33 cantons and 538 communes (municipalities) in Gironde.

The following is a list of the 33 cantons of the Gironde department (with their INSEE codes), following the French canton reorganisation which came into effect in March 2015:

The inhabitants of Gironde are known, in French, as Girondins (women: Girondines).

Evolution of the population in Gironde 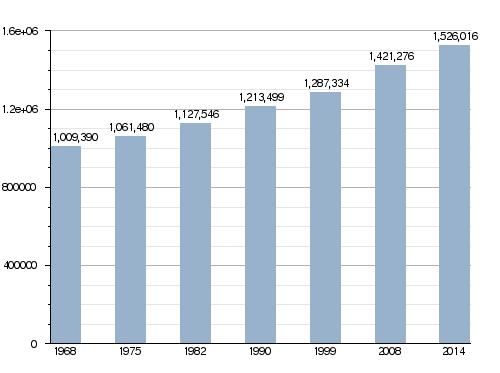 All content from Kiddle encyclopedia articles (including the article images and facts) can be freely used under Attribution-ShareAlike license, unless stated otherwise. Cite this article:
Gironde Facts for Kids. Kiddle Encyclopedia.