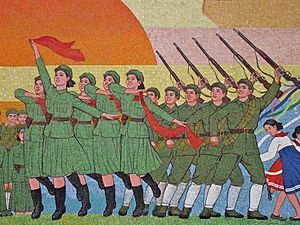 Most important to militarists is discipline. Discipline means to follow a set of rules. It also means training that follows such rules. A strong military, they say, is good for discipline. There are many areas where moral goals and the culture of the military can be applied. Most notable are private business, government, education and entertainment.

Militarism is related to militarization. Militarist countries often have a strong military. Sparta in Ancient Greece, Prussia in the 19th century was militarist, for example. North Korea is a good example in modern times. In militarised societies the military either run the government, or have heavy military influence. Often the head of state is a military person, though that does not always mean the society is militarised.

All content from Kiddle encyclopedia articles (including the article images and facts) can be freely used under Attribution-ShareAlike license, unless stated otherwise. Cite this article:
Militarism Facts for Kids. Kiddle Encyclopedia.