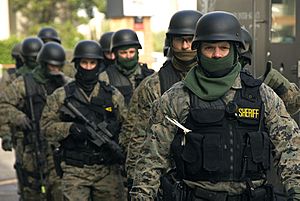 Police SWAT team members, some armed with assault rifles, prepare for an exercise.

Militarization is the general movement of a country to focus its production on war. This includes production of war machines such as tanks and aircraft as well as arms for infantry. There is a focus of the population to produce these goods. An example of this is seen when females during the Second World War would work in factories to produce planes and tanks. Militarism is simply a country that is focusing on increasing their military might through production and concentration of capital resources. This movement can be started in either a country at war already or in a country that is newly entering a conflict. Example of this include the one stated earlier, since the United States entered the Second World War they shifted from supplying Britain to producing their own weapons. When Germany was about to begin their invasion of Europe they started militarization. They broke the Treaty and began to produce weapons. Their focus changed from economic progress to fascism and militarism.

All content from Kiddle encyclopedia articles (including the article images and facts) can be freely used under Attribution-ShareAlike license, unless stated otherwise. Cite this article:
Militarization Facts for Kids. Kiddle Encyclopedia.