The Italian Social Republic informally known as the Republic of Salò, was a puppet state with limited recognition that was created during the later part of World War II, existing from the beginning of German occupation of Italy in September 1943 until surrender of German troops in Italy in May 1945.

The Italian Social Republic was the second and last incarnation of the Italian Fascist state and was led by Duce Benito Mussolini and his reformed anti-monarchist Republican Fascist Party which tried to modernise and revise fascist doctrine into a more moderate and sophisticated direction. The Italian Social Republic exercised nominal sovereignty in Northern and Central Italy, but was largely dependent on German troops to maintain control.

In July 1943, after the Allies had pushed Italy out of North Africa and subsequently invaded Sicily, the Grand Fascist Council—with the support of King Victor Emmanuel III—overthrew and arrested Mussolini. The new government began secret peace negotiations with the Allied powers. 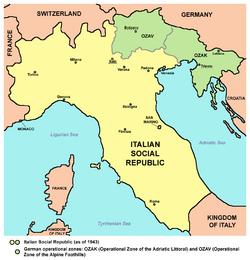 When the Armistice of Cassibile was announced 8 September, Germany was prepared and quickly intervened. Germany seized control of the northern half of Italy, freed Mussolini and brought him to the German-occupied area to establish a satellite regime. The Italian Social Republic was proclaimed on 23 September 1943. The RSI received diplomatic recognition from only Germany, Japan and their puppet states.

Around 25 April 1945, Mussolini's fascist republic collapsed. In Italy, this day is known as Liberation Day (festa della liberazione). On this day a general partisan uprising, alongside the efforts of Allied forces during their final offensive in Italy, managed to oust the Germans from Italy almost entirely.

All content from Kiddle encyclopedia articles (including the article images and facts) can be freely used under Attribution-ShareAlike license, unless stated otherwise. Cite this article:
Italian Social Republic Facts for Kids. Kiddle Encyclopedia.