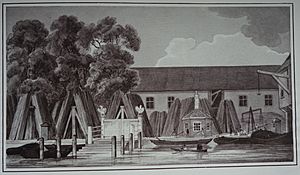 A reproduced painting of the Steelyard (Souvenir of the British Exhibit in the Hall of Nations IPA Leipzig, 1930) 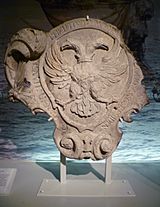 Caius Gabriel Cibber: Arms of the Hanseatic League (c.1670) on display in the Museum of London

The Steelyard, from the Middle Low German Stalhof, was the main trading base (kontor) of the Hanseatic League in London during the 15th and 16th centuries. 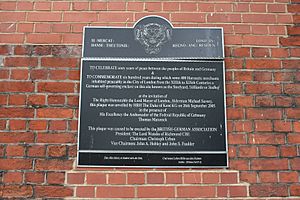 Commemorative plaque placed in 2005 at Cannon Street station, near the location of the Steelyard

The Steelyard was located on the north bank of the Thames by the outflow of the Walbrook, in the Dowgate ward of the City of London. The site is now covered by Cannon Street station and commemorated in the name of Steelyard Passage. The Steelyard, like other Hansa stations, was a separate walled community with its own warehouses on the river, its own weighing house, chapel, counting houses, a guildhall, cloth halls, wine cellars, kitchens, and residential quarters. As a church the Germans used former All-Hallows-the-Great, since there was only a small chapel on their own premises. Merchants operating out of the Steelyard were granted certain privileges and were exempt from customs duties and some taxes. In effect, the Steelyard was a separate and independent community, governed by the codes of the Hanseatic League, and enforced by the merchants' native cities.

In 1988 remains of the former Hanseatic trading house, once the largest medieval trading complex in Britain, were uncovered by archaeologists during maintenance work on Cannon Street Station.

All content from Kiddle encyclopedia articles (including the article images and facts) can be freely used under Attribution-ShareAlike license, unless stated otherwise. Cite this article:
Steelyard Facts for Kids. Kiddle Encyclopedia.