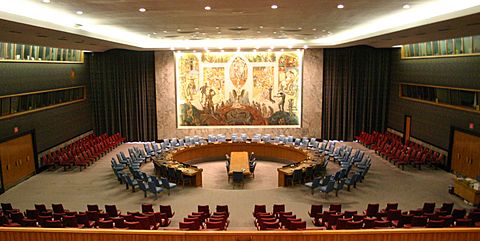 A great power is a nation or state that is able to influence other states in most of the world. That is possible because it has great economic, political and military strength. Its opinions are taken into account by other nations before taking diplomatic or military action. Characteristically, they have the ability to intervene militarily almost anywhere, and they also have soft, cultural power, often in the form of economic investment in less developed portions of the world. Five great powers are permanent members of the United Nations Security Council.

The great powers today are:

All content from Kiddle encyclopedia articles (including the article images and facts) can be freely used under Attribution-ShareAlike license, unless stated otherwise. Cite this article:
Great power Facts for Kids. Kiddle Encyclopedia.