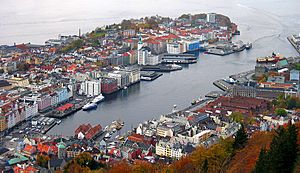 Bergen is the second largest city and municipality in Norway. The city has a population of 275,000 in the municipality, and 238,098 in the urban area. Bergen was a county until 1972, when it was merged with Hordaland. The old wharf Bryggen is a World Heritage Site.

Bergen is on the west coast of Norway, and they export a lot of fish. It has a temperate oceanic climate, with high rainfall every month.

All content from Kiddle encyclopedia articles (including the article images and facts) can be freely used under Attribution-ShareAlike license, unless stated otherwise. Cite this article:
Bergen Facts for Kids. Kiddle Encyclopedia.