Pskov (Russian: Псков, ancient Russian spelling Пльсковъ (Pleskov)) is an old city in the northwest of Russia. It is about 20 kilometres (12 mi) east of the Estonian border, on the Velikaya River. 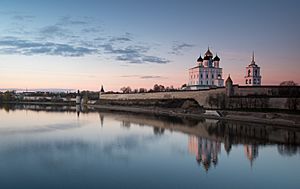 Pskov still preserves much of its medieval walls, built from the 13th century on. Its medieval citadel is called either the Krom or the Kremlin. Within its walls rises the 256-foot-tall (78 m) Trinity Cathedral, founded in 1138 and rebuilt in the 1690s. The cathedral contains the tombs of saint princes Vsevolod (died in 1138) and Dovmont (died in 1299). Other ancient cathedrals adorn the Mirozhsky Monastery (completed by 1152), famous for its 12th-century frescoes, St. John's (completed by 1243), and the Snetogorsky monastery (built in 1310 and stucco-painted in 1313).

Pskov is exceedingly rich in tiny, squat, picturesque churches, dating mainly from the 15th and the 16th centuries. There are many dozens of them, the most notable being St. Basil's on the Hill (1413), St. Kozma and Demian's near the Bridge (1463), St. George's from the Downhill (1494), Assumption from the Ferryside (1444, 1521), and St. Nicholas' from Usokha (1536). The 17th-century residential architecture is represented by merchant mansions, such as the Salt House, the Pogankin Palace, and the Trubinsky mansion.

Among the sights in the vicinity of Pskov are Izborsk, a seat of Rurik's brother in the 9th century and one of the most formidable fortresses of medieval Russia; the Pskov Monastery of the Caves, the oldest continually functioning monastery in Russia (founded in the mid-15th century) and a magnet for pilgrims from all over the country; the 16th-century Krypetsky Monastery; Yelizarov Convent, which used to be a great cultural and literary center of medieval Russia; and Mikhaylovskoye, a family home of Alexander Pushkin where he wrote some of the best known lines in the Russian language. The national poet of Russia is buried in the ancient cloister at the Holy Mountains nearby. Unfortunately, the area presently has only a minimal tourist infrastructure, and the historic core of Pskov requires serious investments to realize its great tourist potential.

On 7 July 2019, the Churches of the Pskov School of Architecture was inscribed as a UNESCO World Heritage Site.

The climate of Pskov is humid continental (Köppen climate classification Dfb) with maritime influences due to the city's relative proximity to the Baltic Sea and Gulf of Finland; with relative soft (for Russia) but long winter (usually five months per year) and warm summer. Summer and fall have more precipitation than winter and spring. 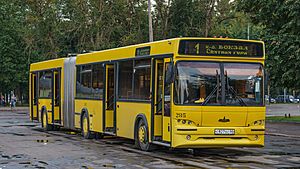 Pskov is twinned with the following cities:

All content from Kiddle encyclopedia articles (including the article images and facts) can be freely used under Attribution-ShareAlike license, unless stated otherwise. Cite this article:
Pskov Facts for Kids. Kiddle Encyclopedia.