Ivan III Vasilievich (Russian: Иван III Васильевич) (22 January 1440, Moscow – 27 October 1505, Moscow), also known as Ivan the Great, was a Grand Prince of Moscow and "Grand Prince of all Rus" (Великий князь всея Руси). Sometimes referred to as the "gatherer of the Russian lands", he tripled the territory of his state, ended the dominance of the Golden Horde over the Rus, renovated the Moscow Kremlin, and laid the foundations of the Russian state. He was one of the longest-reigning Russian rulers in history. 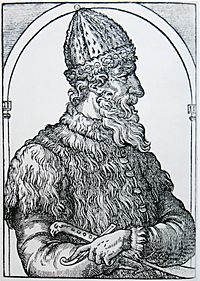 Ivan's parents were Vasily II and Maria of Borovsk. He was co-regent with his father during the later years of his life and succeeded him in 1462. Ivan tenaciously pursued the unifying policy of his predecessors. Nevertheless, he was cautious to the point of timidity. He avoided as far as possible any violent collision with his neighbors until all the circumstances were exceptionally favorable, always preferring to attain his ends gradually and circuitously. The Grand Duchy of Moscow had by this time become a compact and powerful state, whilst her rivals had grown weaker, a state of affairs very favorable to the speculative activity of a statesman of Ivan III's peculiar character. Before he died he made an impressive program for, centered around and directed by, Italian artists and craftsmen. His plan was able to make new buildings in Kremlin and the walls were strengthened and furnished with towers and gates. Ivan III reigned for forty three years, dying on October 27, 1505 and he left his empire to his son Vasili. 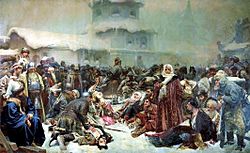 Ivan's destruction of the Novgorod assembly 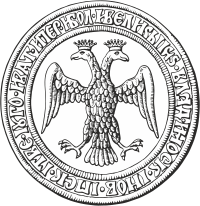 Reverse of Ivan III's seal from 1472, after his marriage with Sophia Palaiologina

His first enterprise was a war with the Republic of Novgorod, which had fought a series of wars stretching back to at least the reign of Dmitry Donskoi over Moscow's religious and political sovereignty more generally and over Moscow's efforts to seize land in the Northern Dvina region more specifically. Alarmed at Moscow's growing power, Novgorod had negotiated with Lithuania in the hope of placing itself under the protection of Casimir IV, King of Poland and Grand Prince of Lithuania, a would-be alliance regarded by Moscow as an act of apostasy from orthodoxy. Ivan took the field against Novgorod in 1470, and after his generals had twice defeated the forces of the republic, at the Battle of Shelon River and on the Northern Dvina, both in the summer of 1471, the Novgorodians were forced to sue for peace, agreeing to abandon their overtures to Lithuania and ceding a considerable portion of their northern territories, and paying a war indemnity of 15,500 roubles. 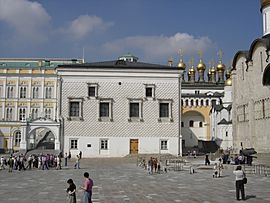 The Palace of Facets (1487-91) was commissioned by Ivan from Italian architects.

Ivan visited Novgorod Central several times in the next several years, arresting a number of pro-Lithuanian boyars and confiscating their lands. In 1477, two Novgorodian envoys, claiming to have been sent by the archbishops and the entire city, addressed Ivan in public audience as Gosudar (sovereign) instead of the usual Gospodin (sir). Ivan at once seized upon this as a recognition of his sovereignty, and when the Novgorodians repudiated the envoys (indeed, one was killed at the veche and several others of the pro-Moscow faction were killed with him) and swore openly in front of the Moscow ambassadors that they would turn to Lithuania again, he marched against them. Deserted by Casimir IV and surrounded on every side by the Moscow armies, that occupied the major monasteries around the city, Novgorod recognized Ivan's direct rule over the city and its vast hinderland in a document signed and sealed by Archbishop Feofil of Novgorod (1470–1480) on 15 January 1478.

Subsequent revolts (1479–1488) were punished by the removal en masse of the richest and most ancient families of Novgorod to Moscow, Vyatka and other central Russian cities. Archbishop Feofil, too, was removed to Moscow for plotting against the grand prince. The rival republic of Pskov owed the continuance of its own political existence to the readiness with which it assisted Ivan against its ancient enemy. The other principalities were virtually absorbed, by conquest, purchase or marriage contract: Yaroslavl in 1463, Rostov in 1474, and Tver in 1485.

Ivan's refusal to share his conquests with his brothers, and his subsequent interference with the internal politics of their inherited principalities, involved him in several wars with them, from which, though the princes were assisted by Lithuania, he emerged victorious. Finally, Ivan's new rule of government, formally set forth in his last will to the effect that the domains of all his kinsfolk, after their deaths, should pass directly to the reigning grand duke instead of reverting, as hitherto, to the princes' heirs, put an end once and for all to these semi-independent princelings. 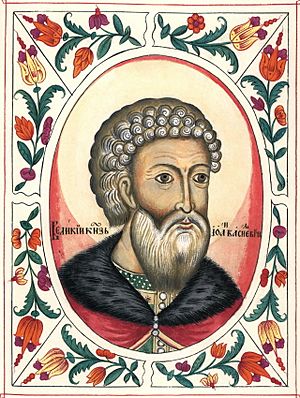 Portrait from the 17th-century Titulyarnik

The character of the government of Moscow under Ivan III changed essentially and took on a new autocratic form. This was due not merely to the natural consequence of the hegemony of Moscow over the other Russian lands but to new imperial pretensions. After the fall of Constantinople, orthodox canonists were inclined to regard the Grand Princes of Moscow as the successors by the Byzantine emperors. Ivan himself appeared to welcome the idea, and he began to style himself tsar in foreign correspondence.

This movement coincided with a change in the family circumstances of Ivan III. After the death of his first consort, Maria of Tver (1467), at the suggestion of Pope Paul II (1469), who hoped thereby to bind Russia to the holy see, Ivan III wedded Sophia Paleologue (also known under her original Greek and Orthodox name of Zoe), daughter of Thomas Palaeologus, despot of Morea, who claimed the throne of Constantinople as the brother of Constantine XI, last Byzantine emperor. Frustrating the Pope's hopes of re-uniting the two faiths, the princess endorsed Orthodoxy. Due to her family traditions, she encouraged imperial ideas in the mind of her consort. It was through her influence that the ceremonious etiquette of Constantinople (along with the imperial double-headed eagle and all that it implied) was adopted by the court of Moscow.

Ivan's son with Maria of Tver, Ivan the Young, died in 1490, leaving from his marriage with Helen of Moldavia an only child, Dmitry the Grandson. The latter was crowned as successor by his grandfather in 1497, but later Ivan reverted his decision in favour of Sophia's elder son Vasily who was ultimately crowned co-regent with his father (14 April 1502). The decision was dictated by the crisis connected with the Sect of Skhariya the Jew as well as by the imperial prestige of Sophia's descendants. Dmitry the Grandson was put into prison where he died, unmarried and childless, in 1509, already under the rule of his uncle.

The grand duke increasingly held aloof from his boyars. The old patriarchal systems of government vanished. The boyars were no longer consulted on affairs of state. The sovereign became sacrosanct, while the boyars were reduced to dependency on the will of the sovereign. The boyars naturally resented this revolution and struggled against it, at first with some success.

It was in the reign of Ivan III that the new Russian Sudebnik, or law code, was compiled by the scribe Vladimir Gusev. Ivan did his utmost to make his capital a worthy successor to Constantinople, and with that object invited many foreign masters and artificers to settle in Moscow. The most noted of these was the Italian Ridolfo di Fioravante, nicknamed Aristotle because of his extraordinary knowledge, who built several cathedrals and palaces in the Kremlin. This extraordinary monument of the Moscow art remains a lasting symbol of the power and glory of Ivan III.

It was in the reign of Ivan III that Russia rejected the Tatar yoke. In 1480 Ivan refused to pay the customary tribute to the grand Khan Ahmed. All through the autumn the Russian and Tatar hosts confronted each other on opposite sides of the Ugra, till the 11th of November, when Ahmed retired into the steppe. 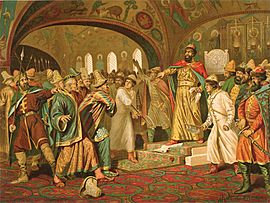 In the following year the grand khan, while preparing a second expedition against Moscow, was suddenly attacked, routed and slain by Ivak, the khan of the Nogay Horde, where upon the Golden Horde suddenly fell to pieces. In 1487 Ivan reduced the khanate of Kazan one of the offshoots of the Horde to the condition of a vassal-state, though in his later years it broke away from his suzerainty. With the other Muslim powers, the khan of the Crimean Khanate and the sultans of Ottoman Empire, Ivan's relations were pacific and even amicable. The Crimean khan, Meñli I Giray, helped him against the Grand Duchy of Lithuania and facilitated the opening of diplomatic intercourse between Moscow and Istanbul, where the first Russian embassy appeared in 1495.

It was in Ivan’s reign that the Christian rulers in the Caucasus began to see the Russian monarchs as their natural allies against the Muslim regional powers. The first attempt at forging an alliance was made by Alexander I, king of a small Georgian kingdom of Kakheti, who dispatched two embassies, in 1483 and 1491, to Moscow. However, as the Russians were still too far from the Caucasus, neither of these missions had any effect on the course of events in the region.

From Matthias Corvinus of Hungary, gun-founders, gold- and silversmiths and (Italian) master builders were requested by Ivan.

In Nordic affairs, Ivan III concluded an offensive alliance with Hans of Denmark and maintained a regular correspondence with Emperor Maximilian I, who called him a "brother". He built a strong citadel in Ingria named Ivangorod after himself, which proved of great consequence to Russians in Russo-Swedish War, 1496-1499 the war with Sweden, which had been preceded by Ivan's detention of the Hanseatic merchants trading in Novgorod.

The further extension of the Moscow dominion was facilitated by the death of Casimir IV in 1492, when Poland and Lithuania once more parted company. The throne of Lithuania was now occupied by Casimir's son Alexander, a weak and lethargic prince so incapable of defending his possessions against the persistent attacks of the Russians that he attempted to save them by a matrimonial compact, and wedded Helena, Ivan's daughter. But the clear determination of Ivan to appropriate as much of Lithuania as possible at last compelled Alexander in 1499 to take up arms against his father-in-law. The Lithuanians were routed at Vedrosha ( 14 July 1500), and in 1503 Alexander was glad to purchase peace by ceding to Ivan Chernigov, Starodub, Novgorod-Seversky and sixteen other towns.

All content from Kiddle encyclopedia articles (including the article images and facts) can be freely used under Attribution-ShareAlike license, unless stated otherwise. Cite this article:
Ivan III of Russia Facts for Kids. Kiddle Encyclopedia.