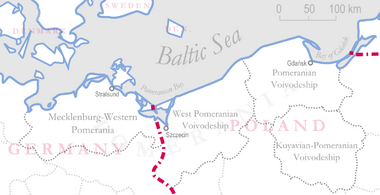 Contemporary administrative units with Pomerania in the name, not representing the exact historical region

Pomerania (Polish: Pomorze; German, Low German and North Germanic languages: Pommern; Kashubian: Pòmòrskô) is a historical region on the southern shore of the Baltic Sea in Central Europe, split between Germany and Poland.

The name derives from the Slavic po morze, meaning "by the sea" or "on the sea". Pomerania stretches roughly from the Recknitz and Trebel rivers in the west to the Vistula river in the east.

The largest Pomeranian islands are Rügen, Usedom/Uznam and Wolin. The largest Pomeranian city is Gdańsk, or, when using a narrower definition of the region, Szczecin. Outside its urban areas, Pomerania is characterized by farmland, dotted with numerous lakes, forests, and towns. The region was strongly affected by post–World War I and II border and population shifts, with most of its pre-war inhabitants leaving or being expelled after 1945. 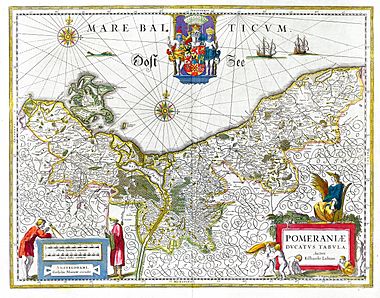 Pomerania is the area along the Bay of Pomerania of the Baltic Sea between the rivers Recknitz and Trebel in the west and Vistula in the east. It formerly reached perhaps as far south as the Noteć river, but since the 13th century its southern boundary has been placed further north.

Most of the region is coastal lowland, being part of the Central European Plain, but its southern, hilly parts belong to the Baltic Ridge, a belt of terminal moraines formed during the Pleistocene. Within this ridge, a chain of moraine-dammed lakes constitutes the Pomeranian Lake District. The soil is generally rather poor, sometimes sandy or marshy.

The western coastline is jagged, with many peninsulas (such as Darß–Zingst) and islands (including Rügen, Usedom, and Wolin) enclosing numerous bays (Bodden) and lagoons (the biggest being the Lagoon of Szczecin).

The eastern coastline is smooth. Łebsko and several other lakes were formerly bays, but have been cut off from the sea. The easternmost coastline along the Gdańsk Bay (with the Bay of Puck) and Vistula Lagoon, has the Hel Peninsula and the Vistula peninsula jutting out into the Baltic.

20,000 years ago the territory of present-day Pomerania was covered with ice, which did not start to recede until the late period of the Old Stone Age or Paleolithic some 10,000 years BC, when the Scandinavian glacier receded to the north. Various archaeological cultures developed in the Mesolithic, Neolithic, Bronze Age, and Iron Age.

Since around 500BC and before 500 AD Pomerania was dominated by East Germanic tribes including several tribes of Goths, who according to archeological evidence and their own tradition have come from Scandinavia. Goths and Rugians are recorded by Roman historians in the areas of Pomerania in 98 AD. The Veneti, non-Germanic tribe, which later assimilated with Slavs, are recorded by Ptolemy and Pliny the Elder around Vistula in first century AD. By the 7th century Slavic tribes (Wends) such as the Pomeranians settled the area.

Pomerania as a part of Poland, Denmark and Germany; German settlement

Pomerania was first conquered by the Polish duke Mieszko I in the second half of the 10th century. Pagan uprisings in 1005 and 1038 resulted in independancy for Western Pomerania and Pomerelia, respectively. Regained by Poland in 1116/1121, the Polish could not hold the Pomeranian duchy longer than 1135, whereas Pomerelia after the 1138 partition of Poland among the sons of Boleslaus Wrymouth became a part of the Polish seniorat which was declared fief of the Holy Roman Empire in 1156.

1000 years of history of the areas between Elbe, the Oder and Vistula 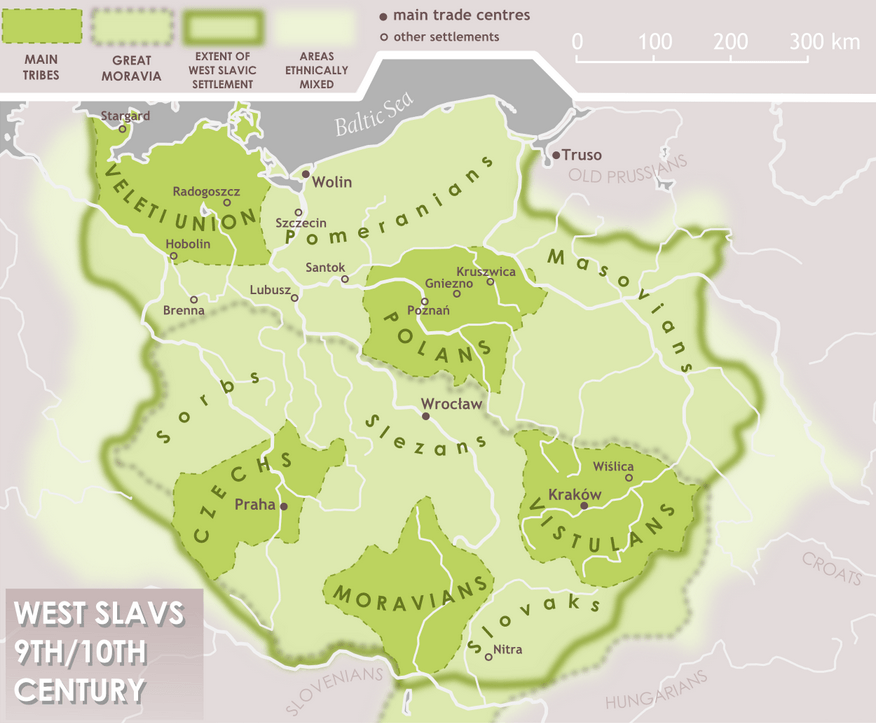 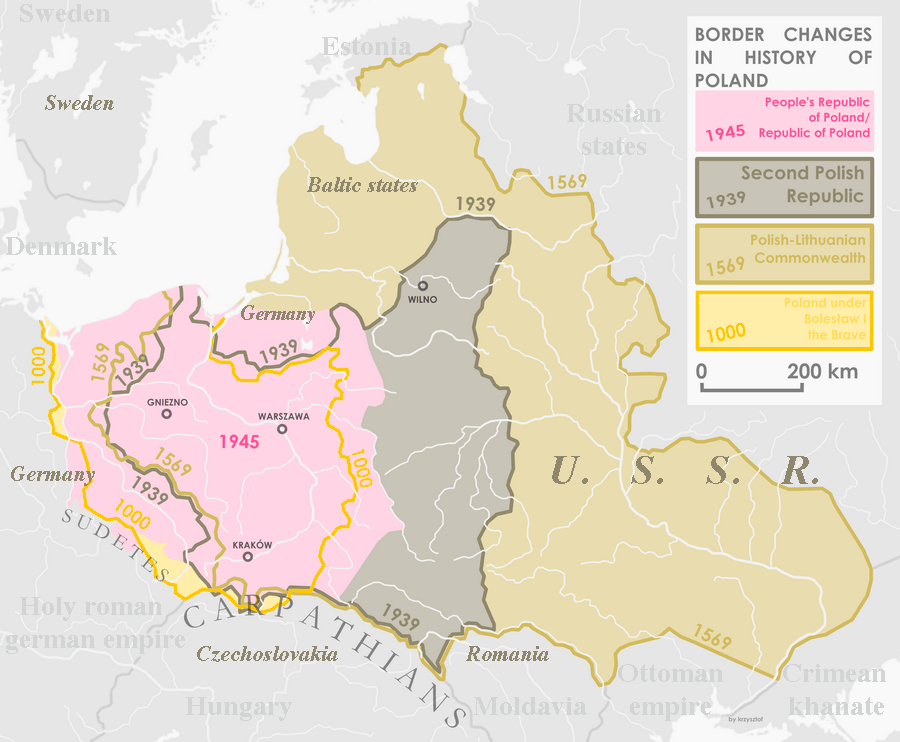 Cities and towns with more than 50,000 inhabitants

Cities in the historical region of Pomerania (with population figures for 2012):

Other cities in the Pomeranian and Kuyavian-Pomeranian voivodeships:

All content from Kiddle encyclopedia articles (including the article images and facts) can be freely used under Attribution-ShareAlike license, unless stated otherwise. Cite this article:
Pomerania Facts for Kids. Kiddle Encyclopedia.