Mieszko I of Poland facts for kids 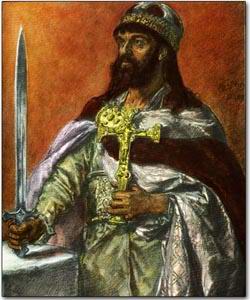 Mieszko I of Poland

Gallus Anonymus writes that Mieszko was blind until his 7th birthday. That information was used by later chroniclers, but it's probably just an allegory.

Mieszko was the first catholic ruler in Poland, he married Dobrawa of Bohemia and after that got baptised.

All content from Kiddle encyclopedia articles (including the article images and facts) can be freely used under Attribution-ShareAlike license, unless stated otherwise. Cite this article:
Mieszko I of Poland Facts for Kids. Kiddle Encyclopedia.