Jerez de la Frontera, or simply Jerez, is a Spanish city and municipality in the province of Cádiz in the autonomous community of Andalusia, in southwestern Spain, as of 2015. It is the fifth largest in Andalusia, and has become the transportation and communications hub of the province.

Jerez de la Frontera is also, in terms of land area, the largest municipality in the province, and its sprawling outlying areas are a fertile zone for agriculture. There are also many cattle ranches and horse-breeding operations, as well as a world-renowned wine industry (Xerez).

Currently, Jerez, with 212,876 inhabitants, is the 25th largest city in Spain, the 5th in Andalusia and 1st in the Province of Cádiz. Its municipality covers an area of 1,188.14 km2 (458.74 sq mi) and includes the Los Alcornocales Natural Park and the Sierra de Gibalbín, also known as Montes de Propio de Jerez.

The city is located 12 km (7.46 mi) from the Atlantic Ocean, in the Campiña de Jerez, region appropriate to cultivate the vineyards that produce the famous sherry. Some famous places in to the city are Alcazar of Jerez, Church of San Miguel, Charterhouse of Jerez, the Cathedral of San Salvador. 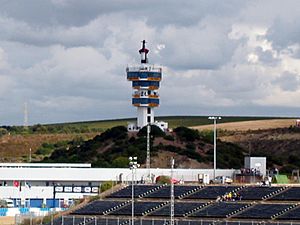 Since 1987 the Grand Prix motorcycle racing has been held at the Circuito de Jerez in early May. On this weekend, the city welcomes tens of thousands of bikers from around the world. The same circuit has hosted several Formula 1 Grands Prix, including the 1997 final race of the season. The race is one of the most watched races in Europe.

Jerez is known as the city of flamenco, sherry, horses and motorcycles. In 2013, Jerez was the European Capital of Wine and 2014, it was the world's first Motorbike Capital. 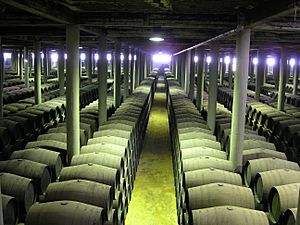 The economy of Jerez has traditionally been centred on the wine industry, with exports of sherry worldwide. The cultivation of fruits, grains, and vegetables and horse and cattle husbandry has also been important to the local economy. It is the home base for the Spanish Military Stud farm, the Yeguada Militar de Jerez de la Frontera.

After the wine crisis in the 1990s, the city is now seeking to expand its industrial base. Tourism has been successfully promoted. The city's strong identity as a center for wine, flamenco, and horses, its popular festivals, MotoGP hosting and its historical heritage have contributed to this success.

The city is the home of Jerez Airport and has also been positioning itself as a logistics hub for western Andalucia, through the integration between the airport, the rail system and nearby ports. 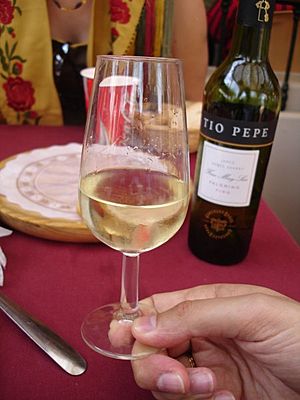 Jerez is known as the world capital of sherry wine. Sherry is a fortified wine made from white grapes that are grown near the town of Jerez. Jerez has been a centre of viniculture since winemaking was introduced to Spain by the Phoenicians in 1100 BC. The practice was carried on by the Romans around 200 BC.

The Moors conquered the region in AD 711 and introduced distillation, which led to the development of brandy and fortified wine. Sherry became very popular in Great Britain. Because sherry was a major wine export to the United Kingdom, many English companies and styles developed. Many of the Jerez cellars were founded by British families.

The city has many bodegas (wineries), many of which are of British origin. Also, Brandy de Jerez is being used in Spanish cuisine in recent years, especially with meats. 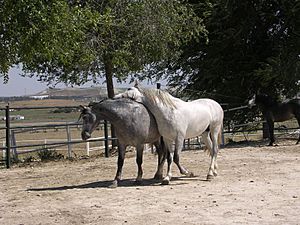 Jerez is the original home of the Carthusian sub-strain of the Andalusian horse breed, known as the Caballo cartujano in Spain. In the latter 1400s, the Carthusian monks began breeding horses. When the Spanish Crown decreed that Spanish horse breeders should breed their Andalusian stock with Neapolitan and central European stock, the monks refused to comply, and continued to select their best specimens to develop their own jealously guarded bloodline for almost four hundred years.

Jerez is the home of the Royal Andalusian School of Equestrian Art, a riding school comparable to the famous Spanish Riding School of Vienna.

The 2002 FEI World Equestrian Games were held in Jerez at the Estadio Municipal de Chapín, which was remodeled for the event, from September 10 to September 22, 2002. This was the 4th edition of the games, which are held every four years and run by the FEI. 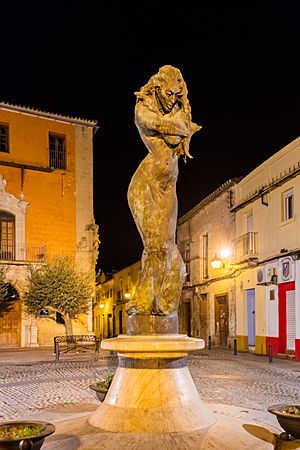 Jerez, the city where flamenco singing began, is also proud of its Andalusian Centre of Flamenco. It was founded in 1993 to safeguard and promote the values and standards of flamenco. It is devoted to the investigation, recovery, and collection of flamenco-related historical documents. It also has a collection of flamenco artifacts. The Centre operates a museum and library to help educate the public and serve as a resource for scholars. Its origins date back to the 18th century and it is currently considered an intangible cultural heritage by UNESCO. Many of the most famous personalities of the city are involved in the performance of flamenco. 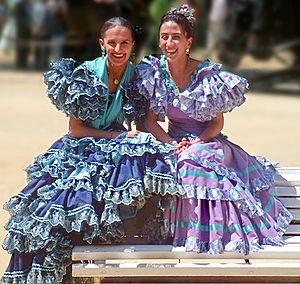 Girls at the Fair, Jerez

A popular festival is the Feria del Caballo, one of the most famous Spanish fairs, and the most important fair in the province of Cádiz. It is celebrated yearly for one week in May, occurring always after the Spanish motorcycle Grand Prix. All booths (casetas) at the fair are open to the public, so that attendees may walk into any one of them and enjoy the food, drinks, and dancing.

Holy Week in Jerez, as in other cities in Andalusia, commemorates the Passion of Jesus Christ. It is celebrated by Catholic religious brotherhoods and fraternities that perform penance processions on the streets during the last week of Lent, the week immediately before Easter.

During the Christmas season, from the end of November to the end of December, many peñas (religious clubs) celebrate the holidays with public festivals where anyone can go to drink, eat, dance and sing Christmas carols, accompanied by friction drums called zambombas.

All content from Kiddle encyclopedia articles (including the article images and facts) can be freely used under Attribution-ShareAlike license, unless stated otherwise. Cite this article:
Jerez de la Frontera Facts for Kids. Kiddle Encyclopedia.