Kiiruna is the northernmost town in Sweden, situated in the province of Lapland. It had 17,002 inhabitants in 2016 and is the seat of Kiruna Municipality (population: 23,167 in 2016) in Norrbotten County. Archeological findings have shown that the region around Kiruna has been inhabited for at least 6,000 years.

Esrange Space Center was established in Kiruna in the 1960s. Also in Kiruna are the Institute of Space Physics and Luleå University of Technology's Department of Space Science.

The re-development of Kiruna is a reconstruction project, as the Kirunavaara mine, run by LKAB, undermines the current town center. Several buildings are to be moved or demolished. The town center is to be moved 3 kilometers to the east.

In 2004, it was decided that the present centre of the municipality would have to be relocated to counter mining-related subsidence. The relocation would be made gradually over the coming decade. On January 8, 2007, a new location was proposed, northwest to the foot of the Luossavaara mountain, by the lake of Luossajärvi.

The first actual work on moving the town was done in November 2007, when work on the new main sewage pipe started.

In the same week, first sketches for the layout of the new part of the town became available. The sketches include a travel centre, the new locations for the city hall and the church, an artificial lake and an extension of the Luossavaara hill into the city.

Kiruna is located in the north of Sweden, 145 kilometres (90 mi) north of the Arctic circle. The city centre is built on the Haukavaara hill at an altitude of 530 m, high above the Torne river to the north and the Kalix river to the south. Near Kiruna are the mountains Kiirunavaara and Luossavaara. Kiirunavaara is an iron ore mine that is the town's primary economic resource. Luossavaara is a former mine and now used as a skiing slope. 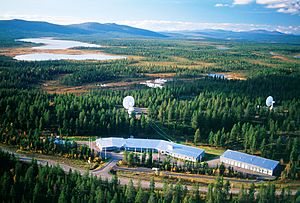 The Kiruna station is part of ESA’s global network

Also in Kiruna are the Institute of Space Physics and the Department of Space Science belonging to Luleå University of Technology.

In 2007, the Swedish government announced that Kiruna would be the host of Spaceport Sweden, signing an agreement with Virgin Galactic. 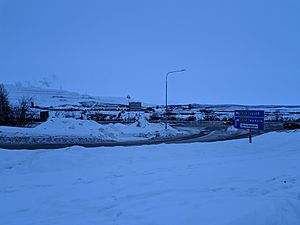 The ore body in Kiruna is an inclined slab of magnetite, 80 m wide, 4 km long and at least 2 km underground

Mining plays a major role as a source of national income and employment for Kiruna and the surrounding region. As with most of Northern Sweden the area is rich with Magnetite which is mined to produce various Iron ore products which are then transported by rail to Narvik port in Norway to be shipped to customers around the world.

Large-scale mining in Kiruna started in the 19th Century right around the time the major Swedish mining company LKAB was founded in 1890. 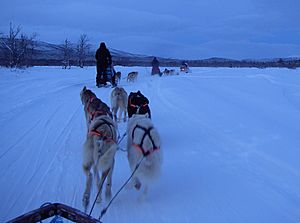 Dog sledding is a popular activity in the countryside surrounding Kiruna.

In winter, the Icehotel and northern lights attract tourists. The long and certain snow cover, which generally lasts from October to May, and frozen lakes and rivers facilitate cross-country and alpine skiing, dog sledding and snowmobiling.

There is ice climbing in the mountains and ice skating on lakes or rivers. The annual Snow festival is held over the last weekend of January and includes scooter jumping, reindeer racing and an ice sculpture contest.

All content from Kiddle encyclopedia articles (including the article images and facts) can be freely used under Attribution-ShareAlike license, unless stated otherwise. Cite this article:
Kiruna Facts for Kids. Kiddle Encyclopedia.