Anders Börje Salming (born 17 April 1951), nicknamed "The King", is a Swedish retired professional ice hockey defenceman. He played for Brynäs IF, the Toronto Maple Leafs, the Detroit Red Wings, and AIK. Salming was one of the first European players to make an impact in the National Hockey League (NHL), paving the way for future generations of players. He was one of the premier defencemen of his era in the NHL, and was recognized for this by being inducted into the Hockey Hall of Fame in 1996. Remembered for his many seasons with the Maple Leafs, he holds numerous franchise records, including most assists. Salming also played extensively for Sweden in international play. He was recognized for this by being selected to the International Ice Hockey Federation (IIHF) Centennial All-Star Team. In 2017 Salming was named one of the '100 Greatest NHL Players' in history.

Salming was born on 17 April 1951 in the village of Salmi in Kiruna, near Torneträsk in Jukkasjärvi Parish. His father, Erland, was of Sami origin, while his mother, Karin, was Swedish. His paternal grandfather Anders Nikolaus had the surname of Saari, but changed to Salming after the village that he and his father (Börje's great-grandfather) had built up. His father was a mineworker and died in an accident in the mine when Salming was 5 years old. He is proud of his Sami heritage, and wears a traditional Sami pewter bracelet. He is the first person of Sami origin to play in a top North American professional sports league.

Salming played with Kiruna AIF in Sweden's Division 2 from 1967–1970, before joining Brynäs in the top division between 1970 and 1973. Brynäs won league championships in 1971 and 1972 with Salming on the squad. Salming was signed as a free agent by the Toronto Maple Leafs on 12 May 1973. Salming was not the Leafs target when they began scouting in Sweden; they were actually interested in Inge Hammarström, but scout Gerry McNamara reported back positively on Salming after seeing him play.

Salming made his National Hockey League (NHL) debut with the Leafs at the beginning of the 1973–74 NHL season against the Buffalo Sabres. After a 7–4 victory, Salming was named the best player of the game. At the end of the season, Salming had recorded 39 points.

Prior to Börje Salming's breakthrough, the consensus in North American ice hockey circles was that European players in general lacked the toughness to play NHL ice hockey, with those from Sweden even being referred to as "Chicken Swedes". However, Salming did much to permanently eradicate that reputation. He played in 1148 regular season games (1099 of them with the Leafs), 81 playoff games and scored 150 goals and 637 assists in the NHL.

On 26 November 1986, late in a game between the Leafs and the Red Wings in Detroit, Salming was knocked down in front of the Leafs net and Gerard Gallant of the Red Wings accidentally cut Salming's face with his skate blade. The injury required facial surgery and more than two hundred stitches to his face.

In 1989, after sixteen years with the Toronto Maple Leafs, he signed as a free agent with the Red Wings, for whom he played one season to finish his career in the NHL. He completed his pro hockey career with AIK of the Swedish Elite League. 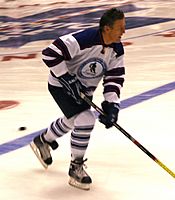 Salming with All-Star Legends 2008 in Toronto

After the end of his active hockey career, Salming moved into the sports underwear business with his own brand Salming Underwear. In 2007, at age 56, he posed nude for acclaimed Swedish graffiti artist Johan A Wattberg to create 31 paintings that were initially exhibited in Sweden before going on permanent display at The SPORT Gallery in Toronto, Canada.

In 1996, he became the first Swedish hockey player to be inducted into the Hockey Hall of Fame. In 1998, he was ranked 74th on The Hockey News' list of the 100 Greatest National Hockey League Players, the highest-ranked player from Sweden.

All content from Kiddle encyclopedia articles (including the article images and facts) can be freely used under Attribution-ShareAlike license, unless stated otherwise. Cite this article:
Börje Salming Facts for Kids. Kiddle Encyclopedia.