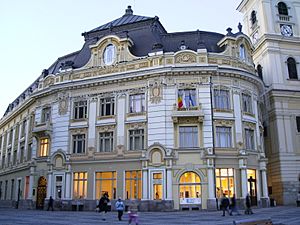 Sibiu (IPA German: Hermannstadt, Hungarian: Nagyszeben) is a city in Transylvania, Romania. About 170,000 people live there. The Cibin River, a tributary of the Olt River flows through the city. It is the capital of Sibiu County.

Sibiu was initially a Daco-Roman city called Cedonia. The town was refounded by the Saxons (German) settlers brought there by the king Géza II of Hungary. The first reference to the area was Cipin and Cibinium from 1191 when Pope Celestine III confirmed the existence of the free prepositure of the Saxons in Transylvania, the prepositure having its headquarters in Sibiu.

In the 14th century, it was already an important trade centre. In 1376, the craftsmen were divided in 19 guilds. Sibiu became the most important ethnic German city among the seven cities that gave Transylvania its German name Siebenbürgen (literally seven citadels). It was home to the Universitas Saxorum (Community of the Saxons), a network of pedagogues, ministers, intellectuals, city officials, and councilmen of the German community forging an ordered legal corpus and political system in Transylvania since the 1400s. In 1699, after the Ottomans withdrew to his base of power in Hungary and Transylvania, the town became capital of Principality of Transylvania (since 1570 the principality was mostly under suzerainty of the Ottoman Empire, however often had a dual vassalage). During the 18th and 19th centuries, the city became the second- and later the first-most important centre of Transylvanian Romanian ethnics. The first Romanian-owned bank had its headquarters here (The Albina Bank), as did the ASTRA (Transylvanian Association for Romanian Literature and Romanian's People Culture). After the Romanian Orthodox Church was granted status in the Austrian Empire from the 1860s onwards, Sibiu became the Metropolitan seat, and the city is still regarded as the third-most important centre of the Romanian Orthodox Church. Between the Hungarian Revolution of 1848 and 1867 (the year of the Ausgleich), Sibiu was the meeting-place of the Transylvanian Diet, which had taken its most representative form after the Empire agreed to extend voting rights in the region.

After World War I, when Austria-Hungary was dissolved, Sibiu became part of Romania; the majority of its population was still ethnic German (until 1941) and counted a large Romanian community, as well as a smaller Hungarian one. Starting from the 1950s and until after 1990, most of the city's ethnic Germans emigrated to Germany and Austria. Among the roughly 2,000 who have remained is Klaus Johannis, the current[update] President of Romania. 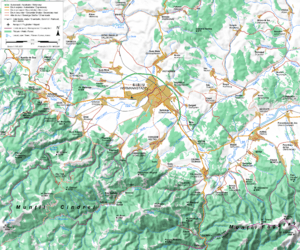 Topographic map of the Sibiu region 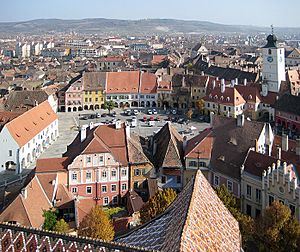 The Cibin river as well as some smaller streams runs through Sibiu. The geographical position of Sibiu makes it one of the most important transportation hubs in Romania with important roads and railway lines passing through it.

All content from Kiddle encyclopedia articles (including the article images and facts) can be freely used under Attribution-ShareAlike license, unless stated otherwise. Cite this article:
Sibiu Facts for Kids. Kiddle Encyclopedia.