Klaus Werner Iohannis also spelled Johannis (born 13 June 1959) is the current President of Romania. He became leader of the National Liberal Party in 2014, after having served as leader of the Democratic Forum of Germans in Romania from 2001 to 2013. Iohannis was a physics teacher and a school inspector before entering full-time politics.

Iohannis was first elected mayor of the city of Sibiu in 2000, representing the Democratic Forum of Germans in Romania. Iohannis won a surprise victory and was re-elected by landslides in 2004, 2008, and 2012.

Iohannis is credited with turning his city into one of Romania's most popular tourist destinations, and the city was declared the European Capital of Culture in 2007. In February 2013, Iohannis became a member of the National Liberal Party, accepting an invitation from Liberal leader Crin Antonescu, and was immediately elected the party's First Vice President, becoming the party's President the following year.

He is a Transylvanian Saxon, this is one of the oldest German minority group in Romania which settled in Transylvania in the 12th century. 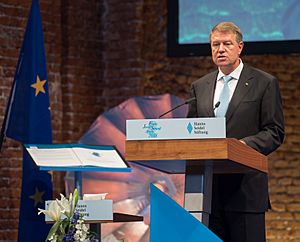 Born in the historic centre of Sibiu to a Transylvanian Saxon family, Klaus Iohannis is the eldest child of Susanne and Gustav Heinz Johannis. He has a younger sister, Krista Johannis (born 1963). Iohannis has stated that his family settled in Transylvania in present-day Romania 850 years ago.

After graduating from the Faculty of Physics of the Babeș-Bolyai University in Cluj-Napoca in 1983, Iohannis worked as a high school physics teacher at various schools and colleges in Sibiu, including, from 1989 to 1997, the Samuel von Brukenthal Gymnasium in Sibiu, the oldest German-speaking school in Romania. From 1997 to 1999, he was Deputy General School Inspector of Sibiu County, and from 1999 until his election as mayor in 2000, he was the General School Inspector, head of public schools in the county. 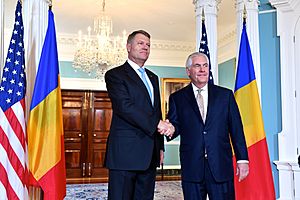 Iohannis is fluent in German and Romanian at a native level and also speaks English. The original spelling of his name (which is German) is Johannis, but the name was registered by a Romanian official as Iohannis on his birth certificate and he has used both spellings interchangeably.

In 1989, he married ethnic Romanian Carmen Lăzurcă, an English teacher at the Gheorghe Lazăr National College in Sibiu. Iohannis is a member of the Evangelical Church of Augustan Confession in Romania, the German-speaking Lutheran church in Transylvania.

All content from Kiddle encyclopedia articles (including the article images and facts) can be freely used under Attribution-ShareAlike license, unless stated otherwise. Cite this article:
Klaus Iohannis Facts for Kids. Kiddle Encyclopedia.