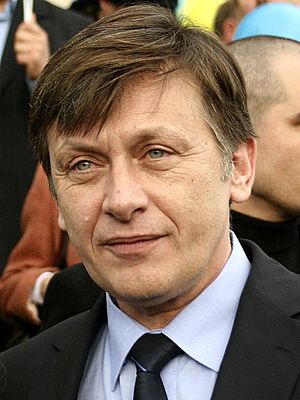 Crin Antonescu (b. 21 September 1959, Tulcea) is a Romanian liberal politician. Antonescu was the President of PNL but in 2014 quit the presidency and now is only a member of the party.

On 3 July 2012, he was elected President of the Romanian Senate. In 2014 he resigned and was replaced by Cătălin Popescu Tăriceanu

All content from Kiddle encyclopedia articles (including the article images and facts) can be freely used under Attribution-ShareAlike license, unless stated otherwise. Cite this article:
Crin Antonescu Facts for Kids. Kiddle Encyclopedia.