Kortrijk is a Belgian city and municipality in the Flemish province of West Flanders.

It is the capital and largest city of the judicial and administrative arrondissement of Kortrijk. The wider area consists of the city of Kortrijk and the villages of Aalbeke, Bellegem, Bissegem, Heule, Kooigem, Marke, and Rollegem. Kortrijk is also part of the cross-border Lille-Kortrijk-Tournai metropolitan area.

The city is on the river Leie, 42 km (26 mi) southwest of Ghent and 25 km (16 mi) northeast of Lille. Kortrijk originated from a Gallo-Roman town at a crossroads near the Leie river and two Roman roads.

In the Middle Ages, Kortrijk grew significantly thanks to the flax and wool industry with France and England and became one of the biggest and richest cities in Flanders. The city is often referred to as the City of the Golden Spurs, referring to the Battle of Courtrai or the Battle of the Golden Spurs which took place on 11 July 1302 on the Fields of Groeninge in Kortrijk.

In 1820, the Treaty of Kortrijk was signed, which laid out the current borders between France and Belgium. Throughout the 19th and 20th century, the flax industry flourished and remains important within the Belgian textile industry today. 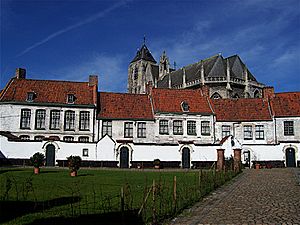 Kortrijk is the largest city in southern West Flanders, with several hospitals, colleges and a university. Much of the city's medieval architecture remains intact and is remarkably well preserved and restored. The béguinage, as well as the belfry, were recognized by the UNESCO as World Heritage Sites in 1998 and 1999.

Kortrijk was the first town in Belgium to have a fully traffic-free shopping street, the Korte Steenstraat (1962). Later, a lot of neighbouring streets were also made traffic-free. As a result, Kortrijk nowadays has one of the biggest traffic-free areas in Belgium.

All content from Kiddle encyclopedia articles (including the article images and facts) can be freely used under Attribution-ShareAlike license, unless stated otherwise. Cite this article:
Kortrijk Facts for Kids. Kiddle Encyclopedia.