Kids Encyclopedia Facts
In this article, the family name is Van Doorne.

Stoffel Vandoorne (born 26 March 1992) is a Belgian professional racing driver who is currently competing for Mercedes-EQ in Formula E. He had previously competed in Formula One for McLaren until 2018. He is currently a test driver of Mercedes-AMG Petronas F1 team. Vandoorne currently resides in both Monte Carlo (Monaco) and Roeselare (Belgium).

Stoffel Vandoorne was born in Kortrijk, West Flanders. Vandoorne was introduced to motorsport at the age of six during a visit to the kart track of World Karts in Kortrijk in Flanders, Belgium, with his father. Vandoorne started karting after the owner of the track gave him a mini-kart.

Initially, lack of funding restricted Vandoorne to race 3 to 4 races per year. By age 16 he was Belgian KF2 Champion. In 2009 he finished as runner-up in the CIK-FIA World Cup in the KF2 category. The same year he won the 'steering wheel' competition held by the Royal Automobile Club of Belgium. The prize money of 45,000 euros helped him start his car racing career in F4 Eurocup 1.6. 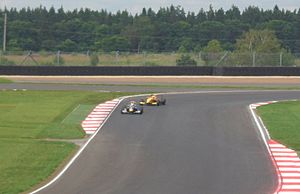 Vandoorne (behind) racing Daniil Kvyat (front) in Formula Renault in 2012

In 2010, Vandoorne moved up to single-seater racing, joining the F4 Eurocup 1.6 series. He went on to win the series on his first attempt, finishing the season with six wins and three further podium finishes. The prize from winning the series helped him to move up to the Eurocup Formula Renault 2.0 the following year. He also earned a place in the FIA Driver Academy.

In 2011, he graduated to competing in the Eurocup Formula Renault 2.0 with Kurt Mollekens' KTR team. He finished fifth overall, with one podium at the Hungaroring and another eight-point-scoring finishes throughout the season. He also participated in Formula Renault 2.0 Northern European Cup, where he finished third in the series' standings with eight podiums.

For the 2012 season Vandoorne remained in the Eurocup, but left KTR to join Josef Kaufmann Racing. He won the championship by ten points after a tight battle between himself and Red Bull-backed Daniil Kvyat. Between them they won 11 of the 14 races and finished over 100 points ahead of their nearest challenger. Vandoorne finished the season with four wins and six podiums to his name. He also contested selected events in the Northern European Cup, where he won five of the seven races that he started, and finished on the podium in a sixth race.

In 2013, Vandoorne raced in Formula Renault 3.5, where he replaced 2012 champion Robin Frijns at Fortec Motorsport. He finished runner-up Kevin Magnussen with four wins and 10 podiums, including a victory at his home track of Spa-Francorchamps. 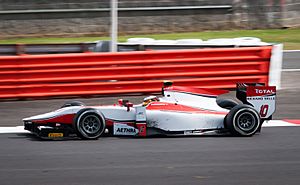 Vandoorne racing at the Silverstone round of the 2014 GP2 Series

In January 2014, it was confirmed that Vandoorne would make his debut in GP2, racing with ART. In the opening race at Bahrain, Vandoorne claimed his first victory of the season in the feature race. He followed this up with four consecutive pole positions, three more wins at the Hungaroring, Monza and Yas Marina and six additional podiums. Despite being a rookie, he finished runner-up to 2014 champion Jolyon Palmer.

Vandoorne reunited with ART for 2015, as well as was considered the main title contender. He was partnered by 2014 Japanese Formula Three champion Nobuharu Matsushita. After five feature race wins, twelve podiums and four pole positions, Vandoorne took the title in Sochi, 108 points over his nearest rival Alexander Rossi.

On 12 February 2016, it was announced that Vandoorne would race a Honda in Super Formula for Dandelion Racing. He finished fourth overall, the highest ranking among Honda engine users, with two wins and one pole position at Fuji Speedway in wet conditions throughout the season.

In February 2013, Vandoorne joined McLaren's Young Driver Programme, under the tutelage of his then manager Richard Goddard, in collaboration with the team's sporting director Sam Michael and its head of communications Matt Bishop, to whom Vandoorne had been introduced in 2011 by Alex Wurz.

In January 2014, he was announced as a third driver for McLaren F1 also taking up driving duties in the GP2 Series for ART Grand Prix. 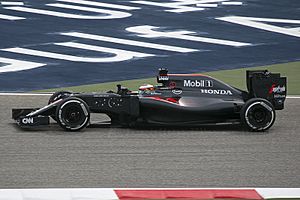 Vandoorne on his F1 debut, driving for McLaren at the 2016 Bahrain Grand Prix

On 31 March 2016, it was announced Vandoorne would be replacing regular driver Fernando Alonso at the Bahrain Grand Prix after the Spaniard was ruled unfit to drive following a major accident in the previous round. After qualifying 12th ahead of Jenson Button, Vandoorne finished 10th and became the first reserve driver to score points on debut since Sebastian Vettel at the 2007 United States Grand Prix.

On 3 September 2016, ahead of the Italian Grand Prix, it was announced by McLaren that Jenson Button would not be racing in 2017, and that Vandoorne would be replacing him to partner Alonso for the 2017 season. 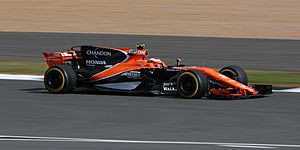 Vandoorne driving for McLaren at the 2017 British Grand Prix

In his debut full season at McLaren, Vandoorne established himself as a considerable rookie next to veteran F1 Champion, Fernando Alonso. With the uncompetitive McLaren, Vandoorne racked up 13 points compared to Alonso's 17. The key issues lay in the reliability and performance of the car which resulted in 1 DNS and 5 DNFs throughout the 20 race season. Nevertheless, he managed to crack into the top 10 in Hungary, Malaysia and Singapore. 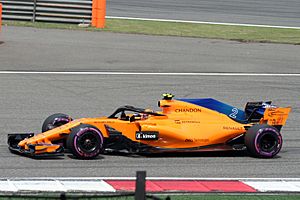 Vandoorne at the 2018 Chinese Grand Prix

In the new McLaren Renault partnership, Vandoorne enjoyed a good start to the season with 3 points finishes in the first 4 races. However, as the season progressed, he struggled to maintain this momentum which left him with 8 points by the Japanese Grand Prix. Moreover, the lack of a competitive package in the McLaren resulted in a long drought in points finishes between the 2018 Azerbaijan Grand Prix and the 2018 Mexican Grand Prix. Vandoorne ended the season in 16th ahead of 4 other drivers in the drivers' championship. However, the last few Grands Prix saw Vandoorne in some impressive battles, particularly in the Abu Dhabi Grand Prix with Esteban Ocon and Romain Grosjean, which led him to finish 8th on the Formula 1 Power Rankings.

It was announced on 3 September 2018 that Vandoorne would leave McLaren at the end of the 2018 season.

Vandoorne was the simulator driver for the Mercedes team in 2019 and was named as one of the team's reserve drivers in 2020, but in the end was not chosen as the driver for the 2020 Sakhir Grand Prix after Hamilton tested positive for COVID-19. Vandoorne drove for Mercedes in the season-ending 2020 Abu Dhabi Young Drivers Test alongside Formula E teammate Nyck de Vries. 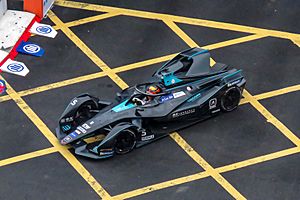 Vandoorne at the 2019 Hong Kong ePrix

It was confirmed on 15 October 2018 that Vandoorne would drive for HWA Racelab for the 2018–19 Formula E season. He would be joining Britain's Gary Paffett to complete the driver lineup for HWA Racelab. Vandoorne would go on and start his Formula E debut just 3 weeks after leaving Formula 1 and would come 17th in his first race. He has also achieved his first qualifying pole position in Formula E at a wet 2019 Hong Kong ePrix. He came third in the 2019 Rome ePrix and booked his first podium in Formula E.

In the 2019-20 season, Vandoorne drove for Mercedes-Benz EQ with 2019 Formula 2 Champion, Nyck de Vries. Vandoorne took 2 consecutive podiums in the two first races. The E-Prix of Mexico and Marrakesh saw a series of poor finishes, and at the time of the season's suspension due to the COVID-19 Pandemic, he sat 29 points below the championship leader, António Félix da Costa. Following the resumption of the season for six races in Berlin, he finished in the points in four of the six races, including his first win in the season finale. He ultimately finished 2nd in the standings, though behind Félix da Costa by 71 points. 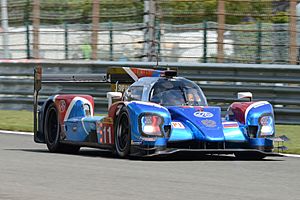 Vandoorne at the 2019 6 Hours of Spa-Francorchamps

In April 2019, it was announced that Stoffel Vandoorne would compete for two races in the WEC for 2018-2019 for SMP Racing. He will drive the Russian BR1 No.11 prototype along with Vitaly Petrov and Mikhail Aleshin in the 6 Hours of Spa-Francorchamps and the 24 hours of Le Mans.

In the 6 Hours of Spa-Francorchamps, Vandoorne, alongside Petrov and Aleshin, finished 3rd place in the LMP1 Class. Vandoorne drove the first stint during weather conditions of snow, hail and rain. At the 24 hour of Le Mans he finished 3rd place.

† As Vandoorne was a guest driver he was ineligible to score points.
* Season still in progress.

† Did not finish, but was classified as he had completed more than 90% of the race distance.

All content from Kiddle encyclopedia articles (including the article images and facts) can be freely used under Attribution-ShareAlike license, unless stated otherwise. Cite this article:
Stoffel Vandoorne Facts for Kids. Kiddle Encyclopedia.