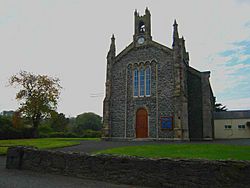 Conlig (from Irish: Con Liag, meaning "stone of the hounds") is a village and townland about halfway between Bangor and Newtownards in County Down, Northern Ireland.

The area includes extant ancient copper mines. Weapons forged with the copper from this mine have been found across Europe, and was traded for tin from Cornwall during the Bronze Age. Copper mining in the area declined, though the site at Whitespots in the village subsequently became one of the most important sources for minerals in the United Kingdom during the 19th century. At this time, the mines were the largest such complex in Ireland, and produced around 13,500 tonnes of lead between the late 17th century until the end of the 19th century. Production stopped in 1900, after a decline from 1854.

The area contains the only known occurrence of the mineral harmotome in Northern Ireland.

Much of the area has been developed by the Department of Environment (DoE) as a country park, and the site can be accessed via the Somme Heritage Centre's car park.

Whitespots has been designated an Area of Special Scientific Interest (ASSI) by the DoE in 1998.

All content from Kiddle encyclopedia articles (including the article images and facts) can be freely used under Attribution-ShareAlike license, unless stated otherwise. Cite this article:
Conlig Facts for Kids. Kiddle Encyclopedia.