Norman Robert Foster, Baron Foster of The Thames Bank, OM, FRIBA, FCSD, RDI (born 1 June 1935) is an English architect. His company has an international design practice. He is the United Kingdom's biggest builder of landmark office buildings. In 2009 Foster was awarded the Prince of Asturias Award in the Arts category.

Foster was born in Reddish, Stockport, England, into a working-class family. He was raised in Levenshulme, Manchester. He did well at school and became interested in architecture. Foster was particularly interested in the works of Frank Lloyd Wright, Ludwig Mies van der Rohe, and Le Corbusier.

He left school at 16 and worked in the Manchester City Treasurer's office. Next, he joined the National Service in the Royal Air Force. After he was discharged, in 1956 Foster attended the University of Manchester's School of Architecture and City Planning. He graduated in 1961. Later, Foster won the Henry Fellowship to the Yale School of Architecture, where he earned his Master's degree Foster also met Richard Rogers at Yale. He then travelled in America for a year. He returned to the UK in 1963. Then he set up an architectural practice as Team 4 with Rogers and the sisters Georgie and Wendy Cheesman. Georgie (later Wolton) was the only one of the team that had passed her RIBA exams. This allowed them to set up in practice on their own. Team 4 quickly earned a reputation for high-tech industrial design.

After Team 4 broke up, in 1967 Foster and Wendy Cheesman started Foster Associates. This later became Foster and Partners. From 1968, Foster worked with American architect Richard Buckminster Fuller until Fuller died in 1983. They worked on several projects that became important in the development of an environmentally sensitive approach to design. This included the Samuel Beckett Theatre project.

The Willis Faber and Dumas Headquarters in Ipswich was one of Foster's earliest commissions after founding Foster Associates.

Foster + Partners' first important building in the UK was the Willis Faber & Dumas headquarters in Ipswich, from 1974. The client was a family firm insurance company which wanted to restore a sense of community to the workplace. Foster created open-plan office floors long before open-plan became the standard. In a town that did not have a lot of public facilities, the roof gardens, 25m swimming pool and gymnasium are good benefits for the company's 1,200 employees. The building is wrapped in a full-height glass facade. This wall follows the medieval street plan. The facade shifts from opaque, reflective black to a glowing backlit transparency as the sun sets. 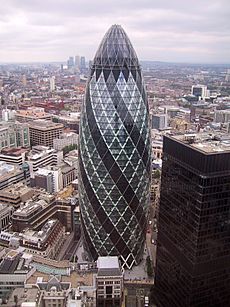 View of 30 St Mary Axe. The building serves as the London headquarters for Swiss Re and is informally known as "The Gherkin".

Today, Foster + Partners works with its engineers to use computer systems. They pay attention to basic physical laws such as convection. They have created efficient buildings like the Swiss Re London headquarters. The walls let in air for passive cooling and then let it out as it warms and rises.

In January 2007, The Sunday Times reported that Foster had called in Catalyst, a corporate finance house, to find buyers for Foster + Partners. Foster does not want to retire, but wants to sell his 80-90% holding in the company valued at £300M to £500M.

Foster is a member of the board of Trustees for the architectural charity Article 25. They design, construct and manage safe, sustainable buildings in dangerous parts of the world. He has also been on the Board of Trustees of The Architecture Foundation. The reason for his wealth is he receives 15% of the building cost.

Foster was knighted in 1990 and appointed to the Order of Merit in 1997. In 1999, he was created a life peer, as Baron Foster of Thames Bank, of Reddish in the County of Greater Manchester. He is a Crossbencher.

He is the second British architect to win the Stirling Prize twice: the first for the American Air Museum at the Imperial War Museum Duxford in 1998, and the second for 30 St Mary Axe in 2004.

Foster was awarded the Pritzker Architecture Prize in 1999.

He is also a Fellow of the Chartered Society of Designers and winner of the Minerva Medal, the Society's highest award. In Germany Lord Foster received the Order Pour le Mérite.

Most recently, in September 2007, Foster was awarded the Aga Khan Award for Architecture, the largest architectural award in the world, for the University of Technology Petronas, in Malaysia.

It was announced in January 2008 that Foster was to be awarded an honorary degree from the Dundee School of Architecture at the University of Dundee. In 2009 Foster was awarded the Prince of Asturias Award in the category Arts.

Foster married business partner Wendy Cheesman. She died in 1989, leaving him with four sons. He next married Indian-born Begum Sabiha Rumani Malik. Sabiha was married to Andrew Knight when she and Foster met. Knight was Chairman of News International. Foster and Sabiha divorced in 1998. Foster is now married to Elena Ochoa, Chairman of the Tate International Council, and founder of Ivory Press. He has five children and three grandchildren.

Foster flies his own private jet and helicopter between his homes in London, France, and Switzerland.

Foster has established an extremely prolific career in the span of four decades. The following are some of his major constructions:

Proposed or under construction

All content from Kiddle encyclopedia articles (including the article images and facts) can be freely used under Attribution-ShareAlike license, unless stated otherwise. Cite this article:
Norman Foster (architect) Facts for Kids. Kiddle Encyclopedia.