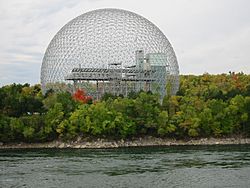 The Montreal Biosphère by Buckminster Fuller, 1967

Fuller published more than 30 books, inventing and popularizing terms such as "Spaceship Earth", and "Synergetics".

He also developed numerous inventions, mainly architectural designs. The best known of which is the geodesic dome. Carbon molecules known as fullerenes were later named by scientists for their resemblance to geodesic spheres.

Some of his books

Panoramic view of the geodesic domes at the Eden Project

All content from Kiddle encyclopedia articles (including the article images and facts) can be freely used under Attribution-ShareAlike license, unless stated otherwise. Cite this article:
Buckminster Fuller Facts for Kids. Kiddle Encyclopedia.