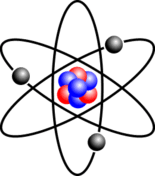 Structure is a fundamental concept in science. It means the arrangement of parts. Examples are the organs in a body, or crystals in a substance like granite.

A structure may refer to buildings, machines and similar things made by people as well as to a rock or a mineral, atoms or sentences. It always reflects the hierarchy of its parts. 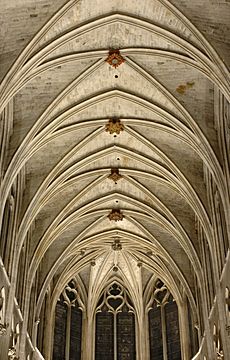 In biology, structures exist at all levels of organization, ranging hierarchically from the atomic and molecular to the cellular, tissue, organ, organismic, population and ecosystem level. Usually, a higher-level structure is composed of multiple copies of a lower-level structure. 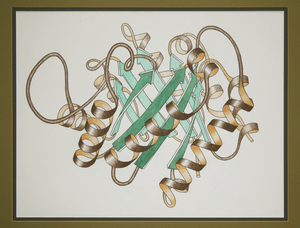 Ribbon schematic of the 3D structure of the protein triosephosphate isomerase. The brown spirals are α-helices and the green arrows are β strands, the components of β-pleated sheets.

Chemistry is the science treating matter at the atomic to macromolecular scale, the reactions, transformations and aggregations of matter, as well as accompanying energy and entropy changes during these processes. The chemical structure refers to both molecular geometry and to electronic structure. The structural formula of a chemical compound is a graphical representation of the molecular structure showing how the atoms are arranged. A protein structure is the three dimensional coordinates of the atoms within (macro) molecules made of protein.

Music is an art form consisting of sound and silence expressed through time. The term musical form, a type of structure, refers to two related concepts:

[[FileSámi storehouse.jpg|thumb|A traditional Sami food storage structure]] A social structure is a pattern of relations. They are social organizations of individuals in various life situations. Structures are applicable to people in how a society is as a system organized by a characteristic pattern of relationships. This is known as the social organization of the group. Sociologists have studied the changing structure of these groups. Structure and agency are two confronted theories about human behaviour. The debate surrounding the influence of structure and agency on human thought is one of the central issues in sociology. In this context "agency" refers to the capacity of individual humans to act independently and to make their own free choices. "Structure" here refers to those factors such as social class, religion, gender, ethnicity, customs etc. which seem to limit or influence the opportunities that individuals have. 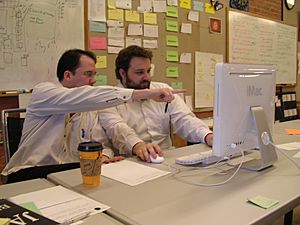 In computer science, a data structure is a way of storing data in a computer so that it can be used efficiently. Often a carefully chosen data structure will allow the most efficient algorithm to be used. The choice of the data structure often begins from the choice of an abstract data type. A well-designed data structure allows a variety of critical operations to be performed, using as few resources, both execution time and memory space, as possible. Data structures are implemented in a programming language as data types and the references (e.g. relationships, links and pointers) and operations that are possible with them.

All content from Kiddle encyclopedia articles (including the article images and facts) can be freely used under Attribution-ShareAlike license, unless stated otherwise. Cite this article:
Structure Facts for Kids. Kiddle Encyclopedia.