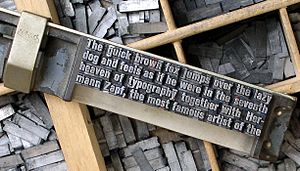 A sentence is a group of words that are put together to mean something. A sentence is the basic unit of language which expresses a complete thought. It does this by following the grammatical rules of syntax.

A complete sentence has at least a subject and a main verb to state (declare) a complete thought. Short example: Walker walks. A subject is the noun that is doing the main verb. The main verb is the verb that the subject is doing. In English and many other languages, the first word of a written sentence has a capital letter. At the end of the sentence there is a full stop or full point (American: 'period').

A phrase or clause is part of a sentence. Above, the words 'at the end of the sentence' is a phrase; 'is' is a verb, and 'there' is an expletive. The subject of the sentence is "a full stop or full point (American: 'period')."

This is an example of a sentence:

In this sentence, 'The dog' is the subject, and 'is' is the verb.

This is an example of a phrase:

There is no verb, so we do not know anything about what the happy dog is doing. It is not a sentence.

A clause is a sentence within a sentence. Example:

Here are some sentences written in Basic English:

The sky is blue.

The baby is smiling.

This is the road to take.

Read a book about the history of America.

There are beautiful flowers growing in the garden.

The cushions are new and I can experience the comfort well.

All content from Kiddle encyclopedia articles (including the article images and facts) can be freely used under Attribution-ShareAlike license, unless stated otherwise. Cite this article:
Sentence Facts for Kids. Kiddle Encyclopedia.