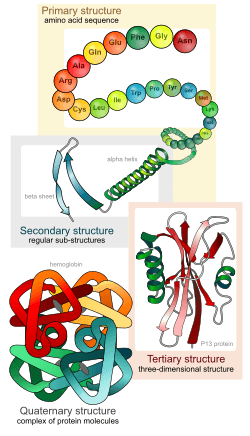 Protein structure describes how protein molecules are organised. This structure is what makes proteins work.

Proteins are important biological macromolecules present in all organisms. They are polymers formed from 20 possible amino acids by RNA translation. Protein structures range in size from tens to several thousand amino acids.

After translation, proteins fold into specific shapes. This is not done by chemical bonds but by weaker forces such as hydrogen bonds. To understand how proteins work, it is often necessary to discover their three-dimensional structure. To do this biophysics uses techniques such as X-ray crystallography, NMR spectroscopy, and dual polarisation interferometry.

There are four distinct levels of protein structure.

Proteins are molecules that consist of one or more chains of amino acids. Each different protein has a distinct set of amino acids in a particular order. The primary structure refers to the sequence of the amino acids of a single polypeptide chain from its start (N-terminus) to its end (C-terminus). The amino acids are held together by a specific type of covalent bond, known as a peptide bond, which are made during the process of protein biosynthesis or translation.

This is the shape (spatial organization) of an entire protein molecule. Protein folding is largely self-organising. It is mainly done by the protein's primary structure – its sequence of amino acids. This is called Anfinsen's dogma. However, the environment in which a protein is synthesized and folds also effect its final shape.

If proteins are built of sub-units this gives another level of structure. This, the quaternary structure, is how the subunits fit together. Haemoglobin, for example, has two alpha and two beta chains. Both the alpha chains and beta chains are coded for by a cluster of six or seven genes, which provide the code for different versions of the molecule.

All content from Kiddle encyclopedia articles (including the article images and facts) can be freely used under Attribution-ShareAlike license, unless stated otherwise. Cite this article:
Protein structure Facts for Kids. Kiddle Encyclopedia.