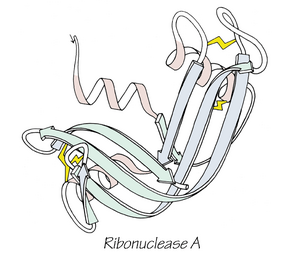 Folded, 3-D structure of ribonuclease A

Anfinsen's dogma is a hypothesis in molecular biology suggested by Christian Anfinsen. The idea is that a protein folding into its native structure is done automatically by the protein's amino acid sequence. It is only true for some proteins. For other proteins, chaperones are needed.

Anfinsen shared the 1972 Nobel Prize for Chemistry for his work on the structure of the enzyme ribonuclease A. The dogma suggests that, in the conditions at which folding occurs, the native structure is a unique and stable state. There are three conditions:

uniqueness
requires that the sequence does not have any other configuration with a comparable free energy.
stability
small changes in the surrounding environment cannot give rise to changes in the minimum configuration.
kinetical accessibility
means the final shape can be got without going through any highly complex changes in the shape (like knots, for example).

How the protein reaches this structure is the subject of the field of protein folding, which has a related dogma called Levinthal's paradox. The Levinthal paradox states that the number of possible conformations available to a given protein is astronomically large, such that even a small protein of 100 residues would require more time than the universe has existed to explore all possible conformations (1026 seconds) and choose the appropriate one.

Prions are an exception to Anfinsen's dogma. Prions are stable conformations of proteins which differ from the native folding state. In Bovine spongiform encephalopathy (Mad Cow Disease), native proteins re-fold into a different stable conformation, which causes fatal amyloid buildup. Other amyloid diseases, including Alzheimer's disease and Parkinson's disease, are also exceptions to Anfinsen's dogma.

All content from Kiddle encyclopedia articles (including the article images and facts) can be freely used under Attribution-ShareAlike license, unless stated otherwise. Cite this article:
Anfinsen's dogma Facts for Kids. Kiddle Encyclopedia.