8 Canada Square (also known as the HSBC Tower) is a skyscraper in Canary Wharf, London. The building serves as the global headquarters of the HSBC Group. The building has 45-stories and houses approximately 8,000 employees.

Having been commissioned by the owners of the Canary Wharf Site to do the outline design prior to gaining site-wide outline planning permission, and because he had designed HSBC's last head office at 1 Queen's Road, Central, Hong Kong Island, Hong Kong, Sir Norman Foster (now Lord Foster of Thames Bank) was appointed as architect.

Construction began in January 1999, with work beginning on the installation of the 4,900 glass panels commencing in the summer of 2000. The work was carried out by Canary Wharf Contractors. In May 2000, three workmen were killed in a crane accident.

The topping out ceremony took place on 7 March 2001, with the hoisting in of the final steel girder attended by bankers, journalists and contractors. The first HSBC employees began work in the building on 2 September 2002, with phased occupation completed by 17 February 2003, and the building's official opening, by Sir John Bond, taking place on 2 April 2003.

Counting from its official opening in April 2003, it was only four years before difficulties emerged in managing the building and its associated costs. In April 2007, HSBC Tower was sold to Spanish property company Metrovacesa, becoming the first building in Britain to be sold for more than £1bn.

After re acquired ownership of the building in December 2008, HSBC once again sold the building, this time to the National Pension Service ("NPS"), the public pension fund for South Korea, on 13 November 2009. HSBC's income statement on completion declared a gain of approximately £350million resulting from the transaction.

In December 2014, Qatar Investment Authority, completed the purchase of this building at an undisclosed price, but the building was expected to fetch more than £1.1 billion (US$1.73 billion). NPS was advised by the estate agents Jones Lang LaSalle and GM Real Estate.

8 Canada Square has a pair of bronze lions guarding the main entrance. These are copies of a pair nicknamed "Stephen" and "Stitt" which have stood outside the Bank's Headquarters at 1 Queen's Road Central in Hong Kong since 1935. The Hong Kong lions are named after yet another pair of lions that guarded the Bank's Shanghai headquarters on The Bund after it opened in 1923.

The lions were cast within sight of the development by the Bronze Age Sculpture Casting Foundry in Limehouse. 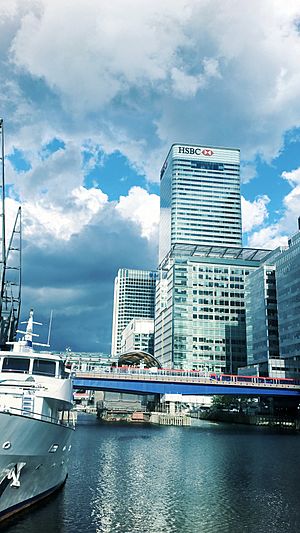 All content from Kiddle encyclopedia articles (including the article images and facts) can be freely used under Attribution-ShareAlike license, unless stated otherwise. Cite this article:
8 Canada Square Facts for Kids. Kiddle Encyclopedia.