Addiscombe is an area of south London within the London Borough of Croydon. It is located east of Croydon, and is situated 9.1 miles (15 km) south of Charing Cross.

It is situated just to the northeast of central Croydon, and is home to a high proportion of people who commute to Central London, owing to its proximity to the busy East Croydon railway station and Tramlink, linking Addiscombe with other parts of Croydon and Wimbledon, as well as extensive bus routes into Central Croydon and surrounding areas. Addiscombe is also a ward, which had a population of 16,883 in 2011.

Addiscombe as a place name is Anglo-Saxon in origin, and means "Eadda or Æddi's estate" from an Anglo-Saxon personal name and the word camp, meaning an enclosed area in Old English. The same Anglo-Saxon land-owner may have given his name to Addington around two miles to the north-west.

By the 13th century, Addiscombe formed part of Croydon Manor, and was known as enclosed land belonging to Eadda. The area was a rural and heavily wooded area, remaining so until the late 19th Century. Its main industries were farming and brick-making. Clay deposits at Woodside provided the raw materials for the latter. During the Tudor period, Addiscombe was a large country estate a mile from Croydon owned by the Heron family. Sir Nicholas Heron, who died in 1586, is interred in Croydon Parish Church.

The estate passed through several owners until 1650 when it was sold to Sir Purbeck Temple, a member of the Privy Council in the time of Charles II. After the death of Sir Purbeck in 1695 and his wife Dame Sarah Temple in 1700, the estate passed to Dame Sarah’s nephew, William Draper, who was married to the daughter of the famous diarist, John Evelyn. When William Draper died in 1718, he left his estate to his son of the same name and it was then passed to his nephew, Charles Clark.

In 1702, Addiscombe Place was built to Sir John Vanbrugh's design. He was best known for Blenheim Palace and Castle Howard and was a prime exponent of the English Baroque style. The house was built on a site which is now the corner of Outram Road and Mulberry Lane. It became known as one of three great houses in Addiscombe, the others being 'Ashburton House' and 'Stroud Green House'. It replaced the fine Elizabethan mansion built by Thomas Heron in 1516.

John Evelyn recorded in his Diary "I went to Adscomb on 11 July 1703 to see my son-in-law’s new house. It has excellent brickwork and Portland stone features, that I pronounced it good solid architecture, and one of the very best gentlemen's houses in Surrey." Distinguished guests who stayed at the mansion include George III, William Pitt and Peter the Great of Russia. Peter the Great was reputed to have planted a cedar tree in Mulberry Lane to record his visit. During the 18th Century Addiscombe Place was successively the home to The Lord Talbot, The Lord Grantham and lastly The Earl of Liverpool, who died there in 1808. 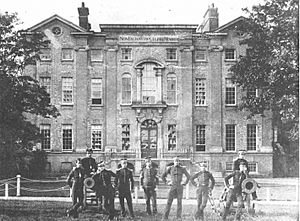 Addiscombe Seminary, photographed in c.1859, with cadets in the foreground.

In 1809, Emelius Ratcliffe sold the Addiscombe Place to the British East India Company for £15,500, whereupon it became a military academy known as the Addiscombe Military Seminary. The company dealt in the importation of tea, coffee, silk, cotton, and spices, and maintained its own private army. The officers of this army were trained at Addiscombe before setting off for India. After the Indian Mutiny of 1857 the British Government took over control of British India and amalgamated the forces of the Company with the Presidency armies. The military seminary was closed in 1861 and the remaining cadets transferred to the Royal Military College, Sandhurst. In 1863, the seminary buildings were sold for £33,600 to developers who razed most of them to the ground. All that survives today are two buildings called 'Ashleigh' and 'India' on the corner of Clyde Road and Addiscombe Road and a former gymnasium on Havelock Road, now private apartments.

Five parallel roads were laid out, to the south of the former college site – Outram, Havelock, Elgin, Clyde and Canning Roads. They were all named after individuals who were prominent in either the military or civil governance of British India namely; Sir James Outram, Bt, Sir Henry Havelock, The Earl of Elgin, The Lord Clyde and The Earl Canning

In addition many roads in the vicinity haves names of similar relevance. Nearby Nicholson Road was presumably named after Brigadier General John Nicholson, who played a prominent part in the storming of Delhi. Grant Road is probably named after General Sir James Hope Grant who commanded a cavalry division at the relief of Lucknow, but a Private P Grant and a Sergeant R Grant both won VCs in the mutiny, as did a Lieutenant C Grant, so further research is needed. Inglis Road is almost certainly named after Major-General Sir John Inglis who played a major part in the relief of Lucknow, as did Lieutenant General Sir James Outram and Major General Sir Henry Havelock. Hastings Road and its neighbour Warren Road are named after Warren Hastings the first Governor-General of India. Academy Gardens commemorates the Academy itself.

With the advent of the railways in the 1830s, Cherry Orchard Road linking Addiscombe with Croydon ceased to be a quiet rural lane and railway workers cottages sprang up, many with the still-visible date of 1838. However it was not until 1858 and the sale of the college, that significant urbanisation occurred.

There was formerly a small chapel attached to Addiscombe Military Seminary and to this, cadets paraded each morning and evening for a service conducted by the chaplain. On Sundays, cadets went down to the Parish Church in Croydon. By 1827, it became clear that Croydon Parish Church was too far away to minister to the college needs and St James' Parish Church was built and consecrated on 31 January 1829. The population of Addiscombe at this time was about 1000. In 1870, the church of St Paul’s (built by Edward Buckton Lamb) was opened and then rededicated in 1874 to St Mary Magdalene. The parish of Addiscombe was formed in 1879.

In the 1890s, the Ashburton Estate was gradually sold for redevelopment, and Ashburton House which had previously hosted literary figures such as Alfred, Lord Tennyson, Thomas Carlyle and Henry Wadsworth Longfellow was demolished in 1910.

The site of Oasis Academy Shirley Park, was once a race course. Woodside Rail station, had sloped exits and high gateways to allow horses to arrive. It even having its own "bay" platform. - now a tramlink stop, Woodside tram stop. 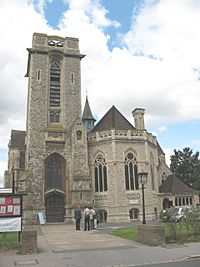 Since early 2006 several parts of Addiscombe have been in the process of extensive regeneration, notably the addition of housing to the site of the former Black Horse Pub and the demolition of former Church Halls and a small garden centre in Bingham Road allowing a new Church Hall and community complex to be built and provide luxury retirement apartments on adjoining land. The old Bingham Road railway station along with two low height railway bridges have been demolished, making way for a new tramlink line with Addiscombe Tram Stop. The former rail station featured in the opening scenes of the 1960 Tony Hancock film "The Rebel".

All content from Kiddle encyclopedia articles (including the article images and facts) can be freely used under Attribution-ShareAlike license, unless stated otherwise. Cite this article:
Addiscombe Facts for Kids. Kiddle Encyclopedia.