Until the 1930s Shirley consisted of a few hamlets between farms and the estates of the large houses. These included Spring Park, Monks Orchard, Shirley Park, Shirley Lodge and Ham, names which are reflected in the names of neighbourhoods today. Originally part of Addington and contrary to popular opinion, Monks Orchard is not named after a monastery in the area, but probably commemorates a family named Monk, who owned some of the land at one time. When Lewis Lloyd acquired the land and had a mansion built in 1854, he adopted the name of a local wood, "Monks Orchard", for the whole estate. 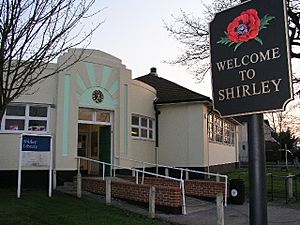 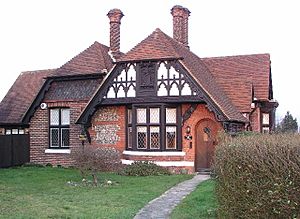 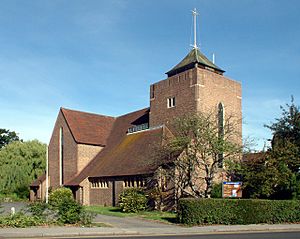 Lloyd's Monks Orchard House was one of the most substantial mansions in the Croydon area. It had 19 bedrooms, a billiard room, library, and numerous other rooms. The Dining Hall alone was over 36 by 21 ft (11 by 4 m). The estate covered a huge area, 1,540 acres (6.2 km²), stretching northwards from the Wickham Road almost to Elmers End, southwards nearly as far as Addington, and eastwards across the Borough boundary into West Wickham. It also included several other major residences, such as Spring Park; farms, including Eden Park, Ham Farm, Shirley Farm, Spring Park Farm and Oak Lodge Farm; two dozen or so cottages; The Rising Sun, The Cricketers and the White Hart; and Beckenham Golf Course.

As late as 1923, the area was described in the following way:

The Estate, which has an extensive frontage to the road between the villages of Shirley and West Wickham, is delightfully rural in character, typifying that which is best in the unspoiled English countryside...

The land seems adapted by nature for those who are seeking country houses not too far from London, being already park-like meadow land, well timbered, and dotted with coppices; thus affording almost unlimited scope for imagination, and taste, in laying out grounds, by utilising the natural advantages already there.

When the estate came up for sale in 1920, only parts of it found buyers, and the rest, including the part we now call Monks Orchard was offered again in 1924. This was purchased by the City of London Corporation for the relocation of the Bethlem Royal Hospital, which had long outgrown its Lambeth home. Building of the new hospital started in 1928, and, sadly, this involved pulling down the old mansion. The hospital development did not need all the land and parts of it were sold off for housing development. There are still substantial grounds around the Hospital largely undeveloped, although planning permission was recently granted amid local controversy. The Hospital and grounds were transferred into Bromley in the 1990s in exchange for South Norwood Country Park.

In the 1930s, a large amount of building took place over much of the open land, largely suburban-style semi-detached houses. To the north, Shirley links into neighbouring areas. However, some land escaped the building boom. Shirley Park House with its extensive grounds became a hotel and in 1965 was bought by the Whitgift Foundation to become Trinity School in a new building constructed on the site. Neighbouring the school grounds is Shirley Park Golf Course. To the south of Shirley are large areas of woodland, including Shirley Hills and Threehalfpenny Wood. Parks and open spaces are dotted across the area, including Miller’s Pond. In Upper Shirley, very large houses in a few exclusive estates have been built, housing ambassadors, etc. 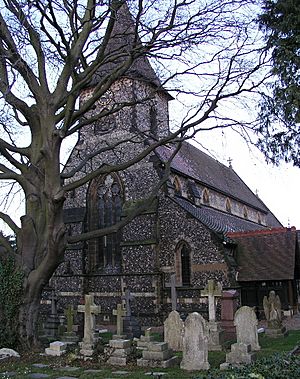 Shirley has three Anglican churches. Shirley Parish Church - St John the Evangelist - was built in 1856 from Sir George Gilbert Scott's design. All Saints' Church, Bridle Road, was built in the 1950s by Rev Aubrey K W Wright and its design is of a very high quality. It was one of the first post-war buildings in Croydon to be listed. St George the Martyr on The Glade was also built in the 1950s. There are also various evangelical churches, Shirley Methodist which is opposite Trinity School for Boys and Baptist Churches. Croydon's Synagogue is on Shirley Oaks Road.

After the Second World War, Croydon's severe housing shortage prompted the Council to make a compulsory purchase order on the golf course. The area was soon covered by prefabs, and by 1955 the County Borough of Croydon Council had formulated a plan for the development of the area as a new estate.

To obtain a slightly rural atmosphere it was proposed that the spaces between the houses should as far as possible be communal grass areas. Each house was to have an enclosed back garden.

The estate was to be well provided with children's play areas, and shops, doctors' surgeries, community hall and other amenities were all planned. A forward-looking feature was that the estate was to be a 'smokeless zone' right from the beginning.

The estate has remained largely unchanged in almost 50 years with the important additions of a multi-ball games court and the family centre. Other facilities include a pub ("The Goat"), the Shirley Youth & Community Centre and the Broom Road doctors’ surgery.

This was originally Shirley Lodge Farm. The 17th-century farmhouse was situated on Shirley Road and was demolished in 1996. There was a farm lodge on Wickham Road which marked the farm entrance, now called Shirley Oaks Road. In 1903 the farm was replaced by the Shirley School, a totally self-contained model village with houses for the children to live in small groups. These were names after flowers and trees, Acacia to Yew. Some of the original buildings are now converted to flats, in addition there are many new houses. To continue the naming, every road in the development is alphabetically named after a flower. The exclusivity of the area and two hectares of open space have made the place popular.

The area lies enclosed near the high street with just two main roads linking to Shirley and Addiscombe. Shirley Oaks Village is home to the only hospital in Shirley, the private healthcare centre Shirley Oaks Hospital.

The tower mill was built by Richard Alwen to replace the first mill on the site, built by his grandfather William Alwen in 1808, after it was burnt by fire in 1854. By 1893, Alfred Rayson, the owner, was forced to abandon the mill as unviable. After closure the mill was allowed to deteriorate, being struck by lightning in 1899 and again in 1906.

In 1951 the mill and land were acquired by the Croydon Corporation. The mill was threatened with demolition when the new John Ruskin School was built but it was protected by its Grade II listed status and strong public interest. The school, now the John Ruskin College, later left the site and housing was built around the mill.

In August 1996, it was announced that the London Borough of Croydon was to receive a grant of £218,100 from the Heritage Lottery Fund for the mill. The grant money has helped restore the mill to working order and open it to the public.

Shirley Windmill is open to the public on the first Sunday of each month June to October open in May on National Mills weekend (Sunday) and usually open for Open House Week End (Sunday) in September.

All content from Kiddle encyclopedia articles (including the article images and facts) can be freely used under Attribution-ShareAlike license, unless stated otherwise. Cite this article:
Shirley, London Facts for Kids. Kiddle Encyclopedia.