Kids Encyclopedia Facts
This article is about the English sports facility. For the American Civil War battle, see Battle of Champion Hill

Champion Hill is a football stadium in East Dulwich in the London Borough of Southwark. It is the home ground of Dulwich Hamlet. 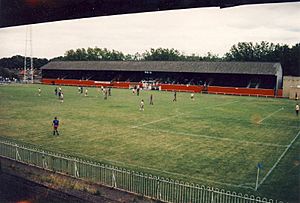 Dulwich Hamlet began playing at the ground in 1912. 'The Hill' was formerly one of the largest amateur grounds in England, with attendances often reaching 20,000 and beyond. The ground was used for football at the 1948 Summer Olympics, staging a game between Mexico and South Korea.

When Dulwich Hamlet suffered financial problems, much of the land they owned was sold for development of a Sainsbury's supermarket. As a result, a new stadium was built on the site of the old Champion Hill stadium, and the Sainsburys supermarket was built on what had been the training pitch before the 1980s. The 'new' stadium was opened in 1992.

The ground was also used by Corinthian-Casuals from 1963 until 1968, Fisher Athletic from 2004 until they folded in 2009, and then by the new Fisher club between their formation in 2009 and 2016 when they moved to their own ground on Salter Road.

It was listed by Southwark London Borough Council as an asset of community value in 2013. The club's record attendance at the new ground of 3,104 was set by a National League South game against Bath City on 5 January 2019.

In March 2018 Dulwich were forced to leave the ground by Meadow Residential, a property development company. They returned to the ground in December after groundsharing at Imperial Fields for several months. 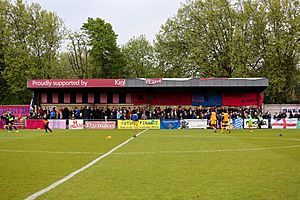 South side covered terrace in April 2017.

The stadium has the covered Tommy Jover main stand along the north side of the pitch, a smaller covered terrace on the opposite side (known as the "Toilets Opposite" stand), and uncovered terraces behind both goals.

The main stand incorporates the changing rooms, clubhouse and other ancillary facilities.

The ground is close to East Dulwich and Denmark Hill stations.

All content from Kiddle encyclopedia articles (including the article images and facts) can be freely used under Attribution-ShareAlike license, unless stated otherwise. Cite this article:
Champion Hill Facts for Kids. Kiddle Encyclopedia.